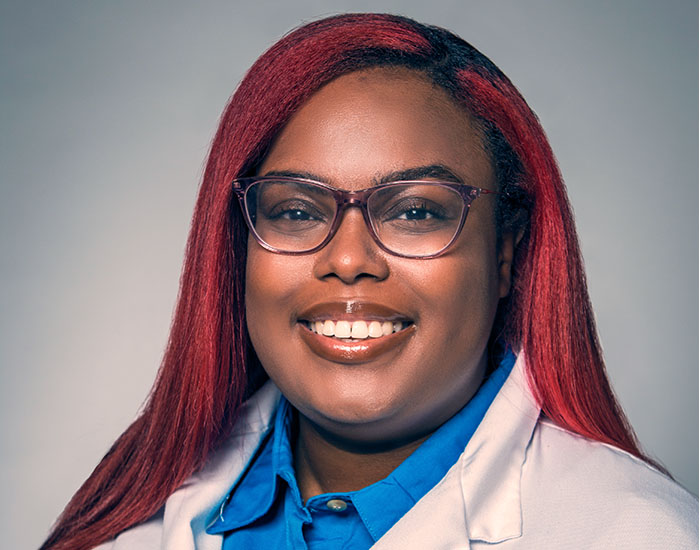 Keck Graduate Institute (KGI) student Lindsey Graham, PharmD ’24, recently received a scholarship from the National Community Oncology Dispensing Association (NCODA), which enabled her to attend the First Annual NCODA Professional Student Organization Meeting. The conference, held September 16 and 17 in Detroit, educated pharmacy students on career paths in oncology, how to prepare for residencies and fellowships, and the business of oncology.

“My favorite session was the one on navigating career paths,” Graham said. “I feel that when you hear about pharmacy in general, people’s minds go to either community or hospital pharmacy. It was interesting to learn about the diversity of fields, especially within oncology.”

One speaker described her experience as a pharmacist at an outpatient clinic, which integrated community and hospital pharmacy. She had multiple responsibilities, including checking IVs, preparing infusions, and working directly with pharmacy patients. She also held more authority than a traditional community pharmacist in that she could make changes to prescriptions and prescribe some medications herself.

“I also learned an important lesson regarding applying for residency and fellowship programs, which is that people are always watching you,” Graham said. “For example, some students were going to a conference, and they were drinking and acting wild on the plane ride. This ruined their opportunity for residency because the people who were interviewing them were on the same flight. So always being professional and putting your best foot forward is key.”

Graham has been interested in pursuing a medical career since she was nine years old when her father talked with her about different careers and which ones he felt were the most promising.

“He talked to me about doctors and anesthesiologists,” Graham said. “That didn’t appeal to me because I didn’t want to be so hands-on, but I still wanted to help people.”

She soon realized that a career in pharmacy was perfectly geared toward her interests. Her high school in Cleveland Heights, OH, offered a career prep program that allowed her to take pharmacy classes her junior and senior years, covering all the requirements needed to become a pharmacy technician.

Graham then worked as a technician throughout her undergraduate education at the University of Cincinnati. She completed a pre-pharmacy track while obtaining her bachelor’s in Biology-Biomedical with a minor in Africana studies.

When looking at different graduate programs, what stood out to Graham about KGI’s Doctor of Pharmacy (PharmD) program was the overwhelmingly positive alumni reviews.

“Most of the time, alumni will say that the school itself wasn’t that important,” Graham said. “However, with KGI, the alumni said they really felt that the teachers and connections they made were valuable, and if they had to do it over again, they would still have chosen KGI. That’s not something you hear very often.”

As she begins her second year in the PharmD program, she has been pleased with her experience so far. She particularly appreciates the small campus.

“When I was an undergrad, some high-level science classes would have 270 people,” Graham said. “Now, my pharmacy classes only have 48 people, and it’s the same group of people I see every day for every class.”

“I’ve really connected with Dr. Reardon because he’s also from Ohio, and I get all of his references, whereas everybody else, being from California, is confused,” Graham said. “Also, I like how Dr. Kudo focuses a lot on professional development.”

She values how all of her professors make sure students fully understand the material, addressing different learning styles.

“The faculty who has truly had the biggest impact on my experience at KGI and as a future pharmacist in general is Dr. Julie Truong,” Graham said. “Unfortunately, she is no longer at KGI. She not only prepared us to be the best pharmacists but the best people by practicing extreme empathy and reminding us that we are all human. She truly prepared us to put our best foot forward in the face of adversity.”

Graham stays very busy. In addition to being involved in various organizations including C.A.R.E. KGI (which hosts Homies Care) and a board member for the Oncology Club, working for CVS and Kaiser as a Pharmacy Intern, and pursuing a Master of Business Administration (MBA) remotely from the University of Cincinnati, she is also the mother of a three-year-old.

Her first year at KGI, she juggled taking classes from home while caring for her daughter full-time. She is grateful for the support of her husband, who also graduated from the University of Cincinnati.

“When I’m working those late nights, even when he does things as simple as putting her in the bath, it makes a huge difference,” Graham said.

Graham feels that obtaining an MBA will further expand her options for a career in oncology.

“I’ve always been interested in business, and one of my ultimate career goals is to either own a pharmacy or to be a director of pharmacy operations in a hospital,” Graham said. “Even if I end up in a more basic position at a community pharmacy, I still feel it’s important to understand the business side to be successful.”

“Lindsey is a fellow Ohioan, a Cincinnati Bearcat, who, like me, has recently fallen far from that buckeye tree to end up here in bright and beautiful SoCal,” Reardon said. “I love my pharmacy students. I really do. But Lindsey, quite frankly, is a real standout in the classroom. She comes into our pharmacy program as an experienced certified pharmacy technician. Her drive, humor, and tremendous enthusiasm for all things pharmacy make Lindsey the kind of student that a professor looks forward to seeing each day in the classroom. Glad that she chose pharmacy. We need more like her.”