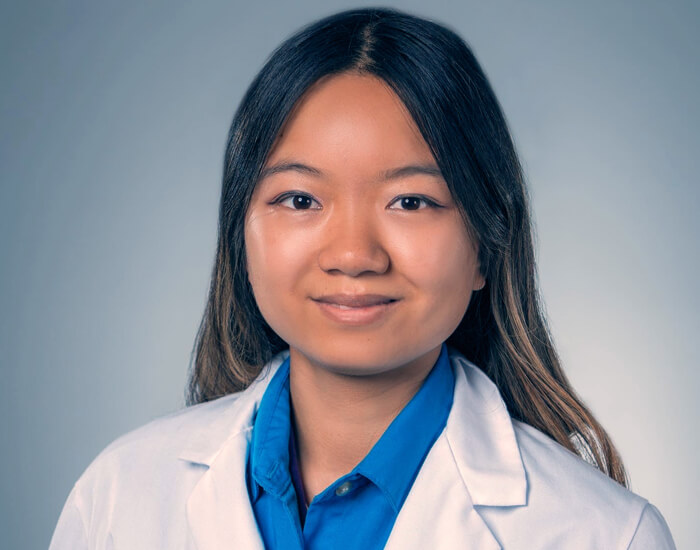 For Keck Graduate Institute (KGI) Doctor of Pharmacy (PharmD) student Skai Fu, PharmD ’25, Eastern and Western medicine are not incompatible. Instead, she believes that each has its place when treating conditions and that medicine can be even more impactful when it draws from both.

Fu’s parents are immigrants from Taiwan, and when she was growing up, she observed how they often used herbs to treat various illnesses. Her mother even took some special herbs—in addition to regular prenatal care—when she was pregnant with Fu to ensure her baby’s health.

At the same time, she saw her grandparents taking prescription medications that fell more into Western medicine.

While Fu knew from personal observation that all of these treatments were effective, she was curious to learn more about disease mechanisms and how different treatments interact with the body and one another. This curiosity, along with a desire to combine the powers of Eastern and Western medicine, motivated her to pursue a career in pharmacy.

Along the way, she experienced some challenges, particularly when learning English as a second language and navigating cultural differences.

“It took a while for my parents to adapt to the culture in the U.S. and the differences between here and Taiwan with how the school system works,” Fu said. “With my classwork, especially in science, my parents had no idea what was going on, so I had to work hard to force myself to understand the material and then apply it to real life.”

Eventually, she graduated from Chapman University in pre-pharmacy and enrolled in a pharmacy school. But during the COVID-19 pandemic, she experienced major health issues that impacted her academic performance.

“I had to take a break to figure out who I really was,” Fu said.

During this interim, she began gaining on-the-job experience in pharmacy. Her manager encouraged her to give pharmacy school another shot.

KGI was on her radar, as she had a mutual friend in the pharmacy school. She went for a campus tour, and everything clicked.

“After discovering KGI, I realized that’s whom I wanted to be—a pharmacist,” Fu said.

As an inpatient intern at UCLA Health in the cardiothoracic department, Fu helps relay important messages between the doctors and nurses regarding patient medications. She also interns at CVS, where she works with the staff to provide flu shots, process prescriptions, and run drive-thru and pickup.

“I do everything the pharmacist does—except for the final check, which I’m not legally allowed to do,” Fu said. “I shadow the pharmacist and see how I can apply my knowledge from school. Working at CVS requires me to put on a different hat than working at UCLA because I have to use patient-friendly terms, whereas, at UCLA, I’m mostly talking to nurses with more medical knowledge.”

“She is really sweet, always communicating with me,” Fu said. “If a student has a question, and I want to double-check with her, she’s always there for me.”

Fu plans to lead a lecture soon, as she feels this would be a good opportunity to see whether teaching is a good fit for her.

“Some residency programs offer a teaching certificate, so if I do enjoy teaching, I would like to incorporate that into my residency in the future,” Fu said.

“Dr. Jun is amazing, and the way she taught the material flowed smoothly into my head,” Fu said. “I had Dr. Tran for cardio; she is great at teaching and makes the material easier for us to digest.”

Fu participates in esports (short for electronic sports), which involves organized, multiplayer video game competitions as a fun diversion from work and school. She previously managed a team for Irvine Valley College, preparing them for tournaments. Now she is the team manager for an amateur team called CB Gaming.

“Esports is one of my passions,” Fu said. “I love watching it, and I have a lot of friends in the industry. I love watching them grow as people and seeing their teams grow as well.”

Growth has been a consistent theme in Fu’s life—and one she will continue to embrace as she embarks upon her career as a pharmacist.

“Skai was in my endocrine class during Spring 2023, and she showed up during my first office hour,” Jun said. “I had never had students come to office hours on the first day of class. She was inquisitive and took the initiative to get a job and become active in professional organizations. She has taken charge of her education.”