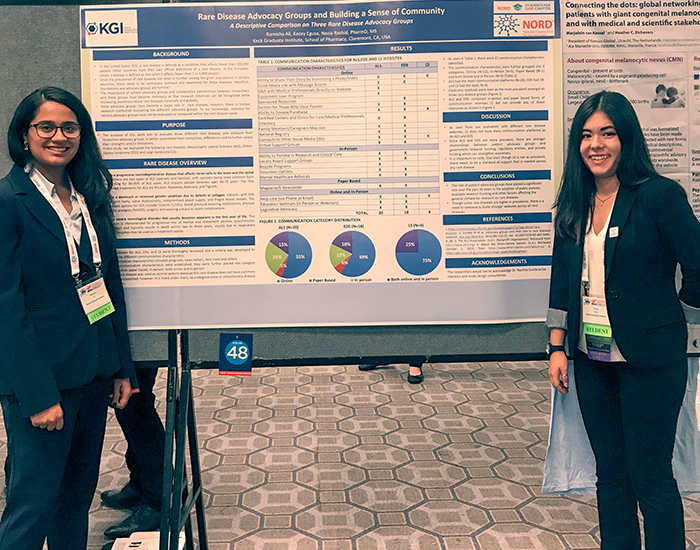 You’re probably familiar with cystic fibrosis, Tourette’s syndrome, and Amyotrophic lateral sclerosis (ALS or Lou Gehrig’s disease). But have you heard of Ehlers-Danlos syndrome? Hamburger disease? What about acromegaly?

Though each of these illnesses is an orphan disease—meaning it affects fewer than 200,000 people worldwide—there is a wide gap in knowledge and awareness among the estimated 5,000 to 8,000 rare diseases. That means that there are many patients, families, caregivers—and, yes, even doctors—who do not have the resources they need.

Two Doctor of Pharmacy students at Keck Graduate Institute (KGI) want to change all that. Kacey Egusa, PharmD ‘22, and Ramisha Ali, PharmD ’21, are champions for patient advocacy, and their dedication earned them each a coveted scholarship to present their joint research at the National Organization for Rare Disorders (NORD) Rare Disease Summit last month in Washington, D.C.

Egusa’s mother passed away two years ago from ALS, a devastating neurodegenerative disorder. Although considered an orphan disease, ALS is well-known, in large part because of “celebrity” patients like Lou Gehrig and Stephen Hawking.

Egusa recognized how familiarity with the disorder contributed to patient advocacy, resulting in a wide range of resources from online support groups to research foundations to huge knowledgebases to aid physicians in diagnosis. Her choice to pursue a career in pharmacy was borne out of a desire to become an advocate for those who may not have the knowledge or the power to advocate for themselves.

“A lot of people don’t think of pharmacists as part of the healthcare team,” says Egusa. “But we are, and we’re often the driving force behind patient advocacy.”

Ali knows the other side of rare disease. She has known two people with Ehlers-Danlos syndrome (EDS), a genetic condition involving defects in collagen that affects every aspect of a person’s body. But as of yet, there are no celebrity patients to advocate for those suffering from EDS, and the syndrome is less well-known than ALS.

As a member of KGI’s Student Chapter of NORD, Ali understands that there are thousands of other rare and orphan diseases that do not have fancy websites, celebrity-endorsed fundraisers, or colorful ribbons designed to raise awareness.

Because of their passion, both young women applied for scholarships to attend the NORD Rare Disease Summit, each hoping to score funding for travel, accommodations, or registration fees. To their surprise, both Egusa and Ali received all three scholarships—a rare honor and a true testament to the quality of students at KGI. What makes the story even more interesting is that the two women didn’t even know each other.

“I saw Kacey’s name on the same email informing us of our scholarships, so I tracked her down,” says Ali with a laugh. “We decided that because we had very little time to put together a quality poster presentation, we would work together.”

With the help of Nazia Rashid, their faculty mentor, Egusa and Ali were able to shine a spotlight on the stunning disparity between the levels of advocacy among rare diseases.

“Without advocacy groups, we in the medical profession don’t have the information and resources we need to diagnose and treat rare diseases,” says Rashid. “So many misdiagnoses could be prevented if we could simply level the playing field.”

With talented and dedicated student pharmacists like Ali and Egusa, the medical community has a prime opportunity to move a step closer to making patient advocacy the norm, rather than the exception, among rare diseases.