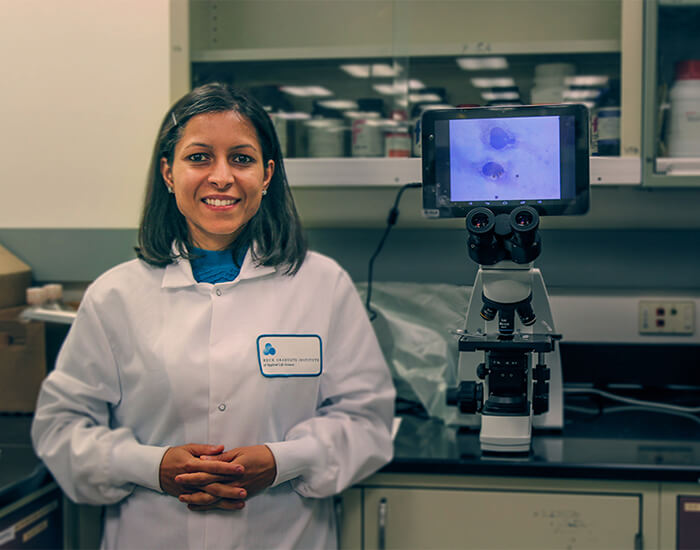 Dr. Rachita Sumbria, Assistant Professor in the School of Pharmacy, has been working at Keck Graduate Institute (KGI) since 2014. In the span of those two years, she has already received two important grants.

In August 2016, she applied for a grant with the Joseph H. Stahlberg Foundation, which supports medical, psychiatric, and psychological research dealing with dementia, autism, or Alzheimer’s disease. Two months later, Sumbria was awarded the $25,000 grant for developing new treatment strategies of Alzheimer’s disease.

Previously, Sumbria received the 2015 New Investigator Research Grant from the Alzheimer’s Association. This distinct grant was designed to fund investigators who are less than 10 years past their doctoral degree.

“Dr. Sumbria receiving this grant is very exciting news for the department,” said Dr. Samit Shah, Associate Dean and Department Chair of Biopharmaceutical Sciences. “It will allow her to continue her research efforts towards development of new treatment strategies, especially biologics with anti-inflammatory and neuroregenerative abilities, for Alzheimer’s disease.”

Sumbria’s research primarily focuses on the blood-brain barrier and she has been targeting Alzheimer’s disease since 2011. This particular grant will allow her to gain preliminary data while testing a new hypothesis.

Currently, many therapeutic options being explored for Alzheimer’s disease include agents that target amyloid plaques and are neuroprotective. Such agents can prevent new brain insult from occurring but cannot reverse brain damage.

Discussing her research, Sumbria said: “The idea of developing erythropoietin for Alzheimer’s disease stemmed from the fact that erythropoietin targets amyloid plaque, offers neuroprotection, but most importantly, also has neuroregenerative ability.” Erythropoietin however does not cross the blood-brain barrier.

The overall goal of the project is to develop a brain-penetrating erythropoietin analogue for Alzheimer’s disease. These funds will help initiate this project.

“These grants are a testament to the excellent research in her lab,” Shah said, “and the hard work of all members of the Sumbria lab and her collaborators.”