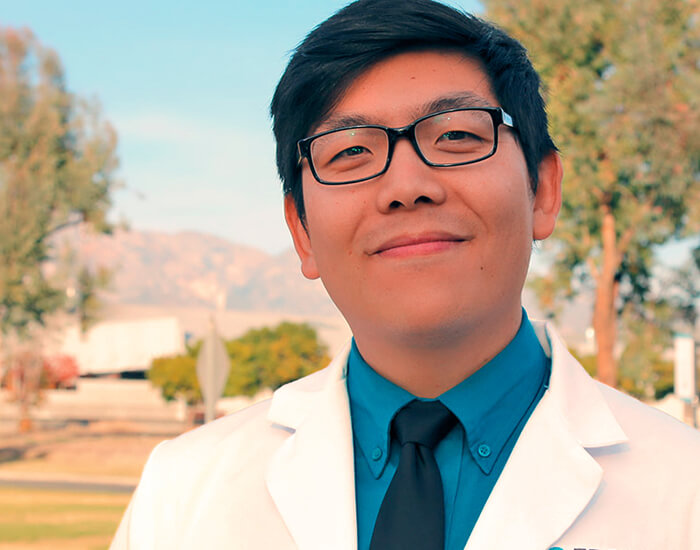 Jae Chang, PharmD ’19, isn’t your typical Keck Graduate Institute (KGI) student. Rather than studying a subject related to science or engineering as an undergraduate, he earned a degree in English, with a minor in film. Then he was off to Korea to teach English.

But, his decision to pursue pharmacy isn’t as unlikely as it may seem. Chang had majored in biology before switching to English. Though interested in healthcare, he had quickly realized he didn’t want to become a doctor; yet, he was unaware of other options until a friend told him about KGI’s Doctor of Pharmacy program.

Chang had found his new profession, but first needed to catch up on some science prerequisites. Once enrolled as a KGI pharmacy student, he sought to fill another gap in his education. “All of my undergraduate classes were in literature,” Chang explained. “I never got to volunteer in a lab or get any research experience. I thought that if I chose to go into this industry, I should have some idea of what it’s like to do research. I felt I was missing that piece.”

This changed in the summer of 2016, once Chang began working with KGI’s Rachita Sumbria, assistant professor of biopharmaceutical sciences. Sumbria had initially expected Chang to simply shadow other graduate students in her lab. Instead, he directly contributed to her research focused on the blood-brain barrier and new treatment strategies for Alzheimer’s disease.

“I didn’t imagine he would do independent research,” said Sumbria, “but he picked up everything so quickly. The kind of work Jae did was very advanced.” She went on to say that Chang participated in sectioning, staining, and imaging mouse brains, while gaining experience with research software and confocal microscopes.s

Chang appreciates the experience. “She was kind and taught me everything,” he recalled. “I learned that research is very time-consuming, patient work. It gave me knowledge of what goes into developing a new therapy or new drug. That helps me appreciate the medications we have on the market.”

Though his time in Sumbria’s lab lasted only one summer, its impact has continued. Remembering Chang’s studies in a fall semester neuropharmacology course, Sumbria said, “What he did in the lab brought the text into reality for him afterward in the classroom.”

Chang’s research contributions also led to an author’s credit on a recent article published in Molecular Pharmaceutics, a prestigious journal highlighting research at the interface of drug discovery and drug development. “It is rather rare for pharmacy students to have the time to commit to research, let alone get their work published,” Sumbria noted. “If he goes on to a fellowship, this shows his commitment to healthcare and biomedical research.”

A fellowship program and a career in the pharmaceutical industry are exactly what Chang envisioned for his future when he began the PharmD program. But, aside from gaining research experience at KGI, he has been learning more about his chosen field. Now that he has completed professional rotations and met practicing pharmacists, Chang is open to other possibilities.

“I can also see myself in more of a research or a clinical role,” he explained. “I know there are a lot more options than I realized when I was going into pharmacy school.”