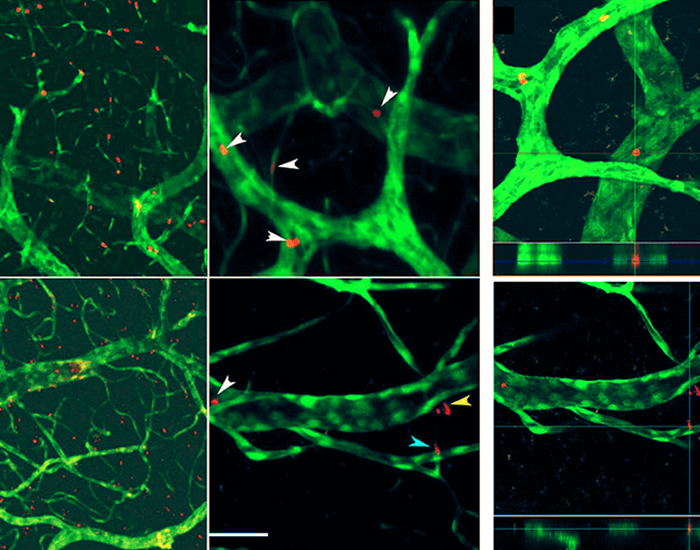 Research Leads to Implications for Pathogenesis of Cerebral Microbleeds

Led by Keck Graduate Institute (KGI) faculty members and a former KGI research associate, the results of a new study published in Frontiers in Cellular Neuroscience may have implications for the pathogenesis of cerebral microbleeds.

The study’s first author is Rudy Chang, who worked as a research associate in KGI School of Pharmacy and Health Sciences Assistant Professor Rachita Sumbria’s lab from November 2015 through January 2018 before pursuing a research opportunity at City of Hope. Sumbria is the senior author for the study along with Assistant Professor Alexander Zambon, who co-authored the study.

Cerebral microhemorrhages are tiny deposits of blood degradation products in the brain and are the pathological substrate of cerebral microbleeds (CMB). CMB are associated with increasing age, cerebrovascular diseases, hypertension, and chronic kidney disease.

“It is largely understood that CMB develop due to frank disruptions in the brain microvasculature,” Sumbria said. “With this study, we attempt to show that non-hemorrhagic mechanisms may be involved in CMB development.

“We show, using a cell culture system, that hemoglobin from stressed red blood cells (RBC) can migrate across the brain endothelium,” Sumbria continued. “We also show, in collaboration with UC Irvine, that stressed RBC can migrate across the brain endothelium to enter the brain parenchyma in vivo. Once in the brain, the hemoglobin or RBC may produce CMB signatures. Ongoing work will help elucidate the significance of this finding to CMB development.”

Chang performed the experiments with help from several KGI students, including Russle Benson, PharmD ’19 and current PhD student Abrar Al Maghribi. The work was partly supported by a grant from the Alzheimer’s Association and intramural support from KGI.

The research also presents the development of several in-vitro assays, such as transwell and live cell imaging.

Zambon said: “The in-vitro assays can then be used to identify the cellular components – proteins and genes – that control the migration of RBCs across endothelial cell barriers for future studies.”