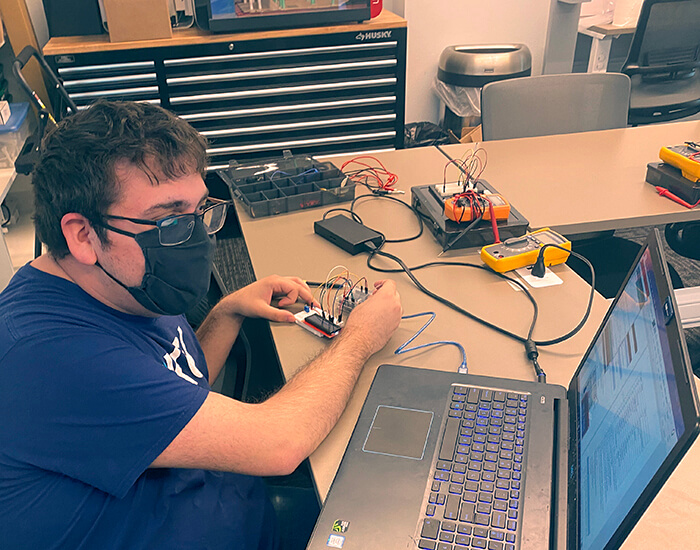 From an early age, Keck Graduate Institute (KGI) student Michael Gonzalez, MSMDE ’22, has always been interested in building and fixing things. His father taught him much about cars over the years, and his parents, both first-generation college graduates, encouraged him to become an engineer.

However, it wasn’t until he was hit by a car at age 17, tearing his left ACL and fracturing his vertebrae, that he decided he wanted to become a biomedical engineer. He was badly injured, requiring surgery and nearly a year of physical therapy to recover. Through the process, he met a biomedical engineer who fitted him with a back brace and knee brace.

“He was excited to learn that I was thinking of becoming a biomedical engineer and gladly gave me advice on how to succeed in that field,” Gonzalez said. “With my personal experience on relying on medical devices like a knee brace, a back brace, and various types of imaging machines, I have become uniquely motivated to make sure that everything I work on is the best that it could be.”

After getting his undergraduate degree in Biomedical Engineering from California Baptist University in Riverside, he went on to apply to KGI’s Master of Science in Medical Device Engineering (MSMDE) program.

“I like KGI’s program because a lot of other programs are mostly focused on the chemistry or biology side, while KGI is heavier on the engineering side,” Gonzalez said. “I also like how small the class sizes are.”

“I like how she gives some freedom in terms of what we can do,” Gonzalez said. “For example, we tested the capabilities of the 3D printers for a specific assignment, but we were also able to print whatever we wanted. I designed a logo from a video game, printing pairs of it from multiple different printers to test the repeatability of these printers.”

Gonzalez also enjoyed the Introduction to the Bioscience Industries class, as he never had any business classes in his undergraduate education. He found KGI Henry E. Riggs Professor of Management Steven Casper‘s in-class examples of different case studies particularly informative.

“The way he encouraged us to translate those to real life and do a market analysis for a new company was really interesting,” Gonzalez said.

One highlight so far of his KGI experience has been a large group project for his Medical Diagnostics class, where he was team leader for the hardware development subgroup for a class-wide project.

“It was the first project I’ve ever done where I was working with business people, biology people, and engineers at the same time,” Gonzalez said.

“Being able to represent people from different disciplines and work with the leaders of other teams to help make the design was really fun.”

In the future, Gonzalez hopes to go into Orthotics, manufacturing medical devices for people with injuries. He feels his firsthand experience with such devices will give him the knowledge to design better versions.

“For example, with my leg brace, I always found that no matter which design I went with, it would always slip down my leg, and I’d constantly readjust it,” Gonzalez said.

Hickerson appreciates the enthusiasm and wisdom that Gonzalez brings to the table.

“We are very fortunate to have Michael as a student at KGI in the MSMDE program,” Hickerson said. “The students in our program all demonstrate a passion for improving healthcare through medical devices and come from many different engineering fields.”