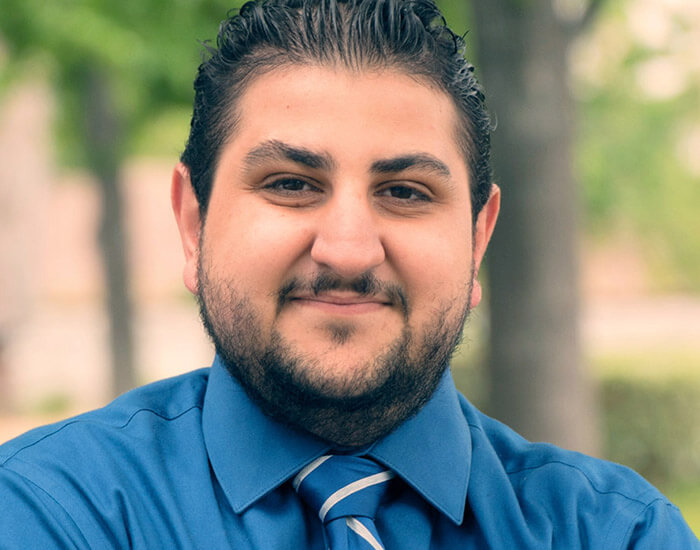 Steven Kechichian, MEng ’18, Embraces Opportunity to Give Back

This story first appeared in KGI’s 2016-2017 Annual Report, which can be accessed at kgi.edu/annualreport.

At the 2017 Commencement, KGI celebrated its first graduates of the Master of Engineering (MEng) in Biopharmaceutical Processing program. The Class of 2018 features MEng student Steven Kechichian, who possesses a unique understanding of how advances in biomanufacturing can benefit people with life-threatening diseases.

Kechichian was first diagnosed with leukemia at age seven and, when it recurred a few years later, he underwent a stem cell transplant as an experimental cancer treatment. It was a difficult form of therapy because of the challenge of finding a match and the large odds of the body rejecting the treatment.

“At that point in the history of stem cell transplants, you could provide the therapy to a few patients in a hospital, but it was very expensive, so you couldn’t make it practical for a large population,” says Professor Parviz Shamlou, Kechichian’s faculty mentor and the director of both the Amgen Bioprocessing Center and the MEng program at KGI.

Kechichian’s second bout with leukemia and transplant was followed by the loss of a functioning immune system and a 100-day hospital stay where he was filled with fear that his body would reject the new cells. He emerged with renewed health as well as a stronger appreciation for science and determination to pursue a career in medicine. He had also gained two City of Hope doctors as mentors, Anna Pawlowska and Joseph Rosenthal.

Kechichian went on to become a biology major and premedical student at the University of La Verne. Completing internships at City of Hope during his undergraduate years opened his eyes to the potential of bioresearch and biomanufacturing. Now, he has come to KGI to help make therapies like the one that saved his life available to more people.

“It was enlightening to see that you could scale up through manufacturing and do a greater good even without going to medical school,” says Kechichian. “As soon as I heard about the MEng program, I knew it was what I wanted to do. I got lucky and survived. This is a great way for me to give back.”

As a member of the program’s inaugural class that enrolled in fall 2016, Kechichian has taken every opportunity to learn and contribute. He is involved in developing a method to grow human cells at a manufacturing scale, assisting with a PhD student’s research, and he provided expertise in computational fluid dynamics (CFD) for a KGI Team Master’s Project (TMP) sponsored by the biopharmaceutical company Bristol-Myers Squibb.

“Steven is exceptionally good not only in the science, but also the mathematical and engineering aspects of the project,” Shamlou says. “He has an understanding of sophisticated, computationally based analysis and modeling. He’s also growing in an area—CFD—that many companies need, so his skills will be in high demand.” The spring 2017 TMP led to a summer internship with Boeringer Ingelheim, a research-driven global pharmaceutical company. During that opportunity, he has worked within the company’s cell culture process science group. He says, “So far the MEng program has been amazing. It’s taken all my skills and put them into flight.”

As for his earlier intention to become a doctor, Kechichian says, “Medical school is still on the table, but right now I’m leaning toward a PhD. I’m looking into the program at KGI. I want to have the opportunity to continue on with science and enjoy it. But most of all, it’s about giving back. I’m pretty lucky to still be here.”