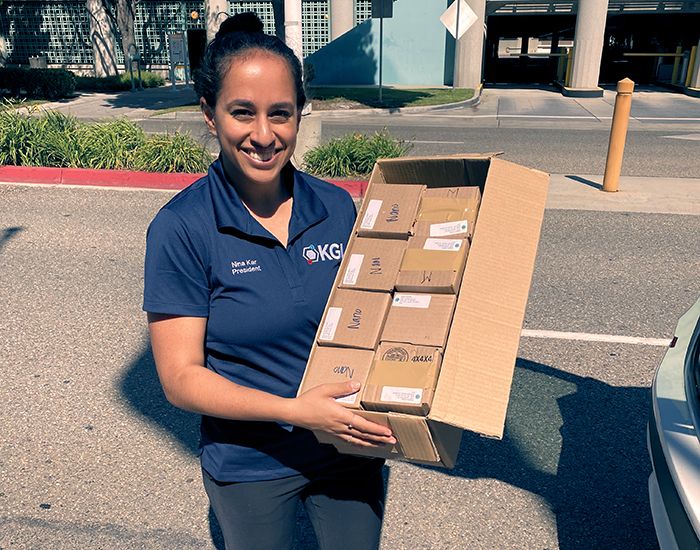 In response to COVID-19, the non-profit Student Scribes organization, led by Keck Graduate Institute (KGI) Master of Business and Science (MBS) student Nina Kar, is producing free 3D-printed reusable masks for first-line responders. While initially production was limited to 12 masks per day, the organization has now teamed up with a 3D printing store, Prozix 3D in Long Beach, to produce up to 80 masks per day.

Kar, MBS ’20, came up with the idea for Student Scribes as an undergraduate at UC Santa Barbara while shadowing a physician who was making the transition from paper to electronic records. Because other doctors were undergoing similar changes, Kar saw how she could meet the demand by connecting them with pre-med students who could take notes and provide office assistance.

It has been a symbiotic relationship in that students like herself who are interested in medical careers can gain firsthand knowledge of a medical professional’s routines and procedures. Kar found her initial experience to be highly educational.

“I loved being in the office and being able to hear how she spoke with patients, how she diagnosed patients, and every step that’s involved with patient care,” Kar said.

Student Scribes has continued to expand during Kar’s time at KGI. Since 2017, they’ve placed almost 70 scribes in paid positions.

In the midst of COVID-19, the organization is contributing to the medical industry in another vital way—providing reusable, form-fitting masks for first-line responders. Kar’s cousin Jay Kar, an engineer, created the prototype which he then produced with his 3D printer.

They soon realized it wasn’t feasible to print in bulk as it took around 15 hours to make one mask. He purchased additional printers, setting them up at Kar’s house, and that’s when Student Scribes stepped in.

The organization has been active with mask production, collecting donations for the masks, and processing mask requests and distribution. They have been producing masks for nearly three weeks now.

“It’s been an evolving process,” Kar said. “There’s a lot of lessons that we’ve learned. First of all, the filament was not to be found anywhere because all the filament is mainly produced in China.”

Additionally, they’ve had to address technical issues with the printers including a printer belt breaking.

The whole process has been a learning curve for Kar, who had no previous experience with 3D printing.

“Honestly, if you would have asked me what a filament was, I would have said, ‘Not the question for me,'” Kar said. “It’s been a really good learning experience.”

The game changer came when Student Scribes formed an alliance with Prozix 3D, who enabled them to greatly increase their output. While other stores were charging $40 per mask, Prozix could produce 11 to 12 masks for the same price.

Now it only takes around two and a half hours to create each mask. To date, they’ve donated 555 masks.

“The KGI community has been very supportive—my friends and professors have really shown interest in not only contributing to the fund but also helping in whatever way they can,” Kar said. “We’re growing quickly, and the biggest thing I can ask from people is just to spread the word.”