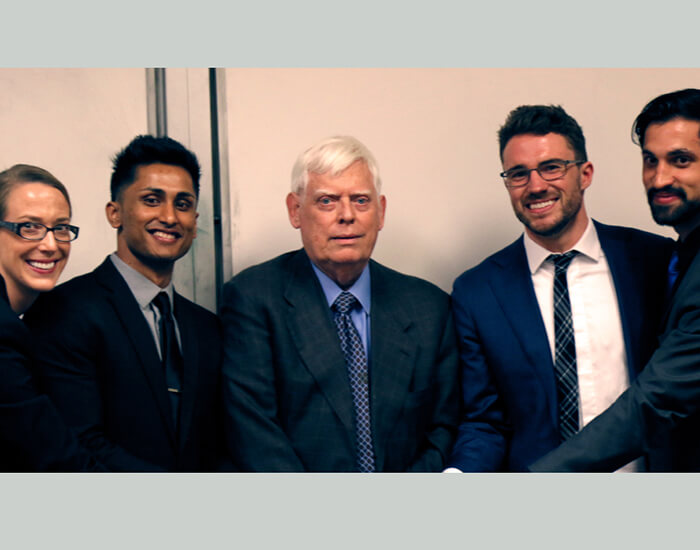 At Keck Graduate Institute’s 15th Annual Business Plan Competition, the winners were two student teams working to help startup companies developing novel therapeutics. The five teams in the April 24 competition were judged by a panel of industry executives and investors. As in previous years, the panel was led by KGI Chairman of the Board of Trustees, Bob Curry, a venture partner at Latterell Venture Partners and CEO of PerceptiMed, Inc.

“This is an incredible opportunity for the students to demonstrate their knowledge of the industry and we were impressed with all five teams,” Curry said. “The students confidently presented the business plans and they responded with poise after fielding tough questions from the judges.”

The judges evaluated both written plans and investor presentations by 21 students participating in KGI’s semester-long Applied Entrepreneurship course. The course is taught by KGI professors Jim Sterling and Joel West, and was created in the Fall 2003 by Curry and David Galas, then Norris Professor at KGI and a co-founder of Ionian Technologies.

“The business plan course is the capstone of our entrepreneurship curriculum,” said West, who has taught the class since 2013. “We push them to integrate everything they’ve learned to create a credible investment proposal for potential investors. This will help them whether they start their own company, join an existing startup, or work in corporate acquisitions.”

The winners were four students presenting their business plan for a new therapy against Bacillus anthracis, which killed five Americans in a 2001 bioterrorism attack. The therapy is being developed by Shield Pharma, a Claremont startup created to commercialize inventions from the laboratory of KGI Assistant Professor Mikhail Martchenko Shilman.

The team featured Asish Thomas, Jack Hardiman, and Mahrad Saeedi—students from KGI’s two-year Master of Business and Science (MBS) program. It also included 2014 MBS grad Elizabeth Henderson, a PhD student who has worked with Martchenko to develop a novel anthrax vaccine. Henderson originally intended to audit the class and serve as an informal advisor to the Shield team, but became a full-fledged participant when she became engrossed by the scientific and business challenges.

“I think we were able to create a compelling story about the threat of anthrax and how Shield Pharma has developed a novel drug to counter the ever-evolving threat of an anthrax attack,” Henderson said. “We also knew our audience and we created a pitch that provided the information they were interested in without too much extraneous detail.”

Runner up was a business plan to develop and market immuno-oncology therapeutics. Students worked on behalf of iStat Therapeutics, being formed by two scientists at the City of Hope. The team included three MBS students—Bretton Smith, Daniel Rossi, and Deep Parikh—as well as Adar Makovski-Silverstein, a student in KGI’s one-year Postdoctoral Professional Masters (PPM) program. Rossi worked for two years as a research associate at City of Hope, while Makovski-Silverstein worked there for five years as a postdoctoral fellow.

“Our team’s diverse professional experience gave us access to a great network of experts,” Rossi said. “Adar and I used our contacts with City of Hope physicians and scientists who could validate our proposal, while Deep and Brett reached out to industry professionals to talk about drug reimbursement.

“Working with City of Hope was an important part of this business plan’s success,” Rossi said, “because of the access we got to their world-leading hospital staff, as well as business development wisdom from their Office of Technology Licensing.” After graduating this month, Rossi hopes to become the company’s first full-time employee once it receives angel funding.

A team of MBS students—Arman Ghorbani, Atin Patel, Alexander Ukanwa, and Atta Zahedi—created a plan for NeuroQore and its neurostimulation treatment for serious depression. The Ottawa-based company had previously worked with KGI student researchers in Dean Steven Casper’s course, Introduction to Bioscience Industries.

“KGI graduates have a remarkable sense of entrepreneurship and a focus on success,” Gallagher said. “When I started the commercial operations of Ionian Technologies, the interns and graduates from KGI were instrumental for our success. KGI students and graduates continue to be critical for my Analytik Jena R&D group, where we benefit greatly from their depth of background in business development, finance, marketing, and the fundamentals of life science.”