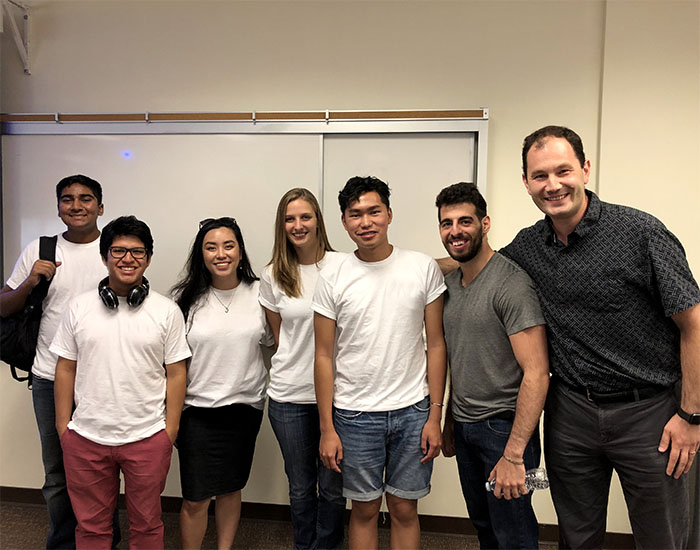 Over two years ago, Tiffany Khaw, Patrick Gonzalez, and a group of other then-undergraduate students began a research paper that investigated new antibacterial agents as part of Keck Graduate Institute (KGI)’s Summer Undergraduate Research Experience (SURE) program. Now that paper, “Identification of Bithionol, Dichlorophen, and Miconazole as Antibacterial Agents against Acinetobacter calcoaceticus,” has been published in ACS Omega.

“We had all moved on with our lives, but it was in the back of our minds, so I’m happy to see it finally published,” said Khaw, who is currently at Wayne State University School of Medicine. “We were patient, and it paid off.”

Their research focused on identifying new antibacterial agents in response to the rising prevalence of multidrug-resistant hospital-acquired infections. Rates of antibiotic resistance have nearly doubled since 2002 and are responsible for two million infections and 23,000 deaths annually in the U.S., according to CDC estimates.

Khaw and Gonzalez’s team was tasked with finding out which drugs with previously undiscovered antibacterial properties could be repurposed to fight A. calcoaceticus, a multidrug resistant pathogen which the World Health Organization Priority Pathogens List ranked highest as urgently needing new treatments in 2017. Three compounds were found to be effective: antifungal Miconazole, anthelmintic Dichlorophen, and Bithionol.

“That was my first exposure to repurposing,” said Gonzalez, who just got accepted into City of Hope’s PhD program. “It’s so simple yet so effective. Now with COVID, we have no specific drugs for the virus, but we’ve been able to repurpose other drugs to fight the pathogen.”

During the SURE program, KGI Associate Professor Mikhail Martchenko Shilman provided undergraduate students the opportunity for interdisciplinary research, culminating in a team project. Each team had a unique composition of students with diverse backgrounds and skill sets.

“Adhitya [Logan] had no prior experience in research, but he was still so helpful and dedicated to learning new things,” Gonzalez said.

One of their biggest challenges was organizing themselves to write and review the manuscript, especially after the SURE program ended and they were attending different schools.

“The physical lab work itself was easy because those kinds of skills translate over no matter where you’re from or what major you are, so the main challenge was communication,” Khaw said. “But we were able to overcome that really well, which is a true testament to teamwork.”

In the program, Shilman educated students on how the body metabolizes drugs as well as the business side of drug development, which includes market research, the cost of clinical trials, and drug reimbursement.

“This perspective is something you don’t usually get in a university, at least not in my case,” Gonzalez said. “So it was quite amazing.”

“When we were writing the research paper, we were taught to frame it like a story so that anybody could read it, from the general public to experts in the field,” Khaw said.

Both Gonzalez and Khaw plan to pursue careers in research, specifically infectious diseases. They credit SURE for helping them along their career trajectory by providing them with real world experience, and now they have a published paper in a scientific journal to show for it.

“I’ve done a research program before that was about the same amount of time, but I spent most of it learning basic laboratory skills, and I didn’t come out of it with any tangible results,” Khaw said.

According to Gonzalez, Shilman’s mentorship was instrumental to their success.

“His leadership and ability to maintain contact with us, even though we had all gone down our own paths, was one of the main reasons we were able to accomplish so much,” Gonzalez said. “I’m really thankful for the opportunity, and it helped get me to where I am today.”