The ‘Genius’ Inside Everybody - Keck Graduate Institute Skip to main content 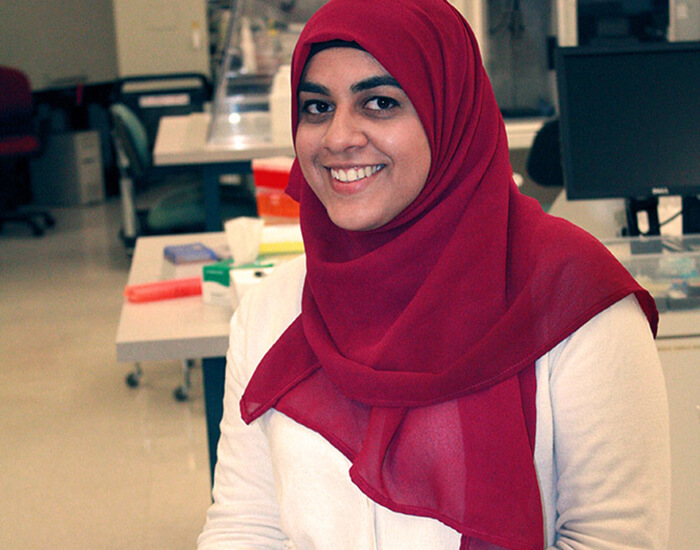 The ‘Genius’ Inside Everybody

Recently, KGI student Sana Sirajuddin came across a YouTube video that really caught her attention. The video showed how a Southern California media and technology company, Not Impossible, was using 3D printing to create hands and arms for amputees in South Sudan and the war-torn Nuba Mountains. In November, Not Impossible printed a prosthetic hand for a 16-year-old named Daniel who had both his arms blown off when he was 14. The 3D printed hand enabled Daniel to feed himself for the first time in two years.

“It was really incredible to see these kids get ‘Ironman’ hands, as one little boy in the video called it,” said Sirajuddin, who is in her second year of the Master of Business and Science (MBS) program. “In places like Palestine, Afghanistan, Iraq, and other war-torn areas, there are a lot of people and children who have been caught in the crossfire. A low-cost prosthetic like this seems like something that could realistically help a lot of people.”

But Sirajuddin didn’t just watch the moving video and move on, she decided to try to print her own prosthetic hand and approached KGI professor Anna Hickerson, program director of the MBS in Medical Devices and Diagnostics, about doing it as an independent research project.

“Any time a student takes the time not only to learn the technology but to connect it so directly to its impact out in the world, that makes me very happy,” Hickerson said.

The first obstacle Sirajuddin had to tackle was to learn SolidWorks, the computer-aided design software commonly used in 3D printing.  “When I first did it, the hand was very stiff, so I had to reduce the size of the joints, but not too much where it gets kind of flabby.  I also had to readjust the design to get the actual clenching mechanism to work properly,” she explained.

Sirajuddin, who credits a junior high school fascination with robots with fostering an early interest in a science career, says it took her about 12 hours to print a whole hand without mistakes. And, although the final product still had some imperfections, the project gave her an enormous sense of accomplishment.

“Often you see people doing great things in the sciences and you think what a genius he or she must be. It seems kind of removed,” Sirajuddin said. “But, if you actually get in there and try to do it, you see that it’s not as impossible as you thought; that it’s something that can actually be done. It changes your perspective.”

Although Sirajuddin is planning on a career in bioprocessing after she leaves KGI, she thinks the research project was great training: “Whether you are printing a prosthetic hand or figuring out the best ways to optimize a cell strain to get the most productive antibodies, it’s all about strategizing and finding the best solution to a problem.”

Subscribe to KGI’s e-newsletter
Request program information
Back to all news Alumni Share Stories, Insights on How to Succeed in the Life Sciences Next news story