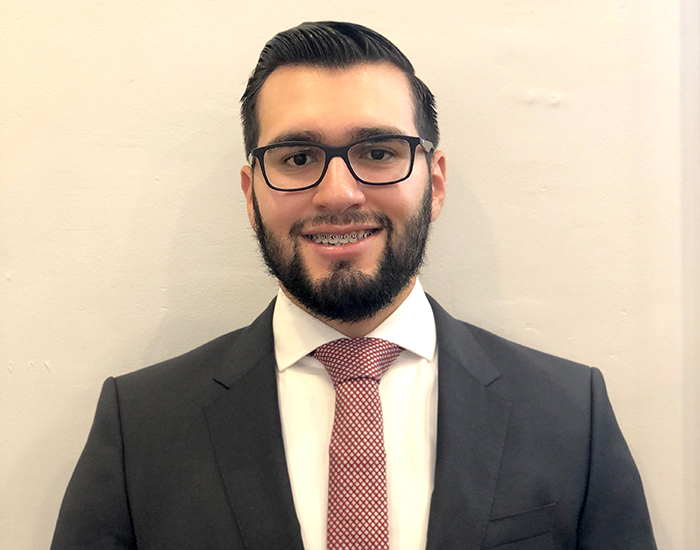 As the son of Mexican immigrants and a first-generation college student, Keck Graduate Institute (KGI) Research Assistant Aldo Arce knew that it was up to him to seek out opportunities to help him achieve his goals. He has done this by first serving in the military and now receiving a Diversity Supplement Grant from the National Institute of Health (NIH). This grant will allow him to research Alzheimer’s Disease as a full-time tech for Dr. Derick Han, associate professor of biopharmaceutical sciences, at KGI.

“Growing up, I was the youngest of three boys, and my mom told us that her job was primarily to provide us with food, clothing, and shelter,” Arce said. “Our job was to go to school and perform. That really stuck with me because nobody helped me with my homework. My mom had a limited education coming from Mexico, and my older brothers didn’t really want to—there’s a 10-year age difference between us.”

Therefore, Arce had to learn everything by himself. This presented challenges, along with the fact that he had no access to a home computer.

The first time that Arce seriously considered higher education was after his oldest brother served in the military and then enrolled in college. Arce discovered that military service would give him the financial means to attend college, and he followed in his brother’s footsteps.

Not only did his service enable him to pursue a college education, but his military experience in itself provided Arce with valuable insights that would shape his future. After getting injured during a training exercise and undergoing years of therapy and treatments, he was sent to Walter Reed National Military Medical Center for a surgical procedure.

“After my surgery—which lasted three to four hours—my doctors told me that I would have a semi-normal life again,” Arce said. “That really surprised me. While I will probably never go back to 100% of the level of physical fitness that I had before my injury, I was still impressed with how successful the surgery was.”

At the same time, Arce saw how many veterans were not so fortunate. Some had to have their limbs amputated. Others suffered from debilitating Traumatic Brain Injuries—including one of his squad leaders.

“That really motivated me to study biology so I could go into medicine—to help the veterans who have experienced these setbacks,” Arce said. “Because while I’m still dealing with some effects from my injury, many have it much worse.”

After completing his service in 2017, Arce enrolled at Chaffey College, which he attended for a year before transferring to the University of La Verne, where he just graduated. At La Verne, many of his professors engaged with him and worked with him one-on-one to master the material, including Professor Dr. Jerome Garcia—one of Han’s collaborators.

“Dr. Garcia guided me down the path of research, which has been really interesting because I didn’t know students had that opportunity during their undergraduate development,” Arce said.

Arce delved deeply into biology as he studied the effects of urban oil drilling on cell viability.

“It was fascinating to learn how one small component within a cell can affect the whole organism,” Arce said. “Because a cell seems so small and insignificant, but when you look at the big picture, you see how it all fits together.”

Before graduation from the University of La Verne, Arce worked with Dr. Garcia and Han to apply for the NIH Diversity Supplement Grant, which he received in June. The grant covers Arce’s salary, travel to attend scientific meetings, and mentorship from Han and Garcia.

The goal of the Diversity Grant is to determine the impact of alcohol intake on the liver and, in turn, evaluate potential correlations between alcoholism and Alzheimer’s Disease. Arce’s responsibilities include assisting Han with research and running experiments. So far, the research has been eye-opening for Arce.

“Most cultures in the world consume alcohol,” Arce said. “When you really think about it, you can see how it’s toxic because you use alcohol to disinfect wounds, but it’s still surprising to discover how a social activity can impact your health in such a negative manner.”

Arce’s primary goal with this research position is to sharpen his critical thinking skills when reviewing medical literature, which will help him succeed in medical school and eventually in a career as a doctor.

“You must think critically when you assess your patients because your patients aren’t going to tell you why they’re experiencing these symptoms,” Arce said. “I also want to improve my ability to focus, my attention to detail, and my time management skills—all those soft skills—as well as hard skills like developing my proficiency with Microsoft Excel, performing experiments, and being able to accurately describe an experiment to anybody that asks.”

His long-term goal is to go into orthopedics or trauma, both of which would potentially enable him to treat other veterans who have suffered serious injuries or are in a life-or-death situation. However, he is open to pursuing other areas of medicine and is excited to gain exposure to these fields through his rotations.

“Aldo is an intelligent young student who served his country in the army,” Han said. “The NIH diversity grant will provide Aldo an excellent opportunity to research Alzheimer’s disease in my lab that would be really beneficial to his medical school application and a career in medicine.”