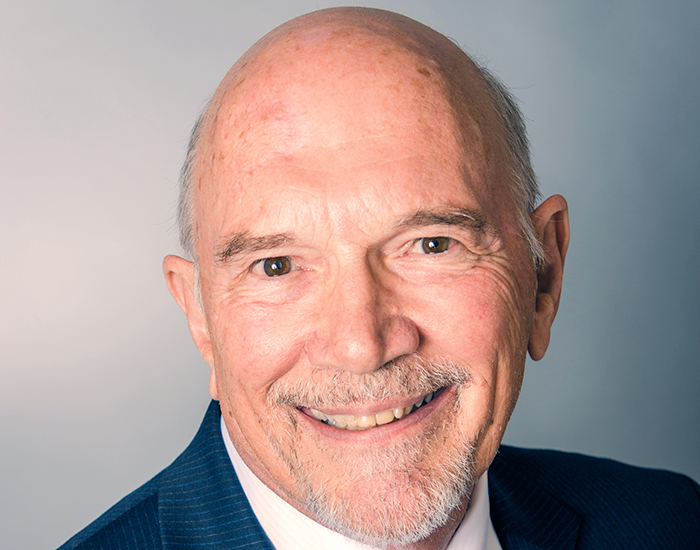 Dr. Ian Phillips, professor emeritus at Keck Graduate Institute (KGI), recently published a colorful memoir, A Life in Science: Adventures, Discoveries and Laureates, recounting his experiences studying with top scientists and Nobel Laureates. The book also details his involvement in major historical events, including meeting Jewish scientists who had fled the Nazis in World War II, being in Berlin the night the wall went up, and nearly being arrested during a coup in Turkey.

The book is written for scientists and laypeople alike—particularly young people who might want a career in science.

As a young boy growing up in London, Phillips had no interest in science or academics in general.

“I enjoyed Boy Scouts because you did practical things like make fire from sticks and tie knots,” Phillips said. “But my grades were terrible, and I just wasn’t motivated.”

Then one day, he went to the Royal Society of Science in London to hear a talk.

“A speaker came on, looking like the very Hollywood image of a professor with big, gray hair,” Phillips said.

The scientist talked about octopus brains and demonstrated octopus behavior, showing how they could perform sophisticated tasks like opening jars.

“It was such a remarkable talk,” Phillips said. “Then, to beat it all, he said that every summer, he went to a marine laboratory in Naples. In fact, he was so well-loved in Naples that they made him an honorary citizen. I thought, ‘I know what I want to be now. I want to be a scientist who studies brains and travels around the world.’ My whole driving force in life started by going to this one talk.”

Phillips went on to earn a PhD in Pharmacology. He held many distinguished positions throughout his career, including Program Director of Neurobiology at the National Science Foundation in Washington, DC, and published over 400 papers and 12 books on vascular medicine. He has been cited more than 20,000 times.

It wasn’t until he retired that he could devote time to writing a memoir. One of his motives was to share knowledge and wisdom with younger generations about significant historical events such as World War II.

“Time seems just to fade, and each generation comes up unaware of what went before,” Phillips said.

He writes about remarkable encounters with Jewish scientists escaping Nazi occupation in Europe, including one Nobel Prize winner who cycled more than 200 miles through France to the American Embassy in Paris to apply for immigration.

Phillips recounts the story of Lise Meitner, an Austrian working in Berlin when the War was about to start.

“She managed to get to Sweden and hide there from the Nazis,” Phillips said. “She had split the atom but never got the Nobel Prize. Her male co-worker received it and never suggested that she deserved the prize, too.”

In his book, Phillips recognizes Meitner and other unsung heroes in science.

Like his life experiences, Phillips’ scientific career has been diverse, spanning a variety of research focuses, including gene therapy, brain anatomy, and hypertension. He has extensively studied angiotensin, a peptide hormone linked to high blood pressure and brain function. It is now relevant to the mechanism by which COVID-19 spike protein enters the body.

As a professor at KGI, Phillips earned the Lifetime Achievement Award in 2019 for his many contributions, including founding the Postbaccalaureate Premedical Certificate and Master of Science in Applied Life Sciences programs and the Center for Rare Disease Therapies, where he served as director.

“In medical school, they don’t teach about rare diseases,” Phillips said. “We wanted to get doctors and politicians to pay more attention to them.”

To this end, he organized KGI’s annual Rare Disease Day. He served as faculty advisor to the student-run Rare Disease Club, educating the medical community on rare diseases in poster competitions and advocating for FDA approval of orphan drugs.

“KGI became quite well-known for rare disease studies,” Phillips said. “I feel good about that because up until that time, I had worked as a bench scientist, and now I was working with real people.”

Though Phillips had more time to complete his memoir once he had retired, the writing process was not without its challenges.

“Recently, I had to go to the hospital because I had a leaky heart valve,” Phillips said. “It would have been so easy just to stop writing. Nobody’s really pressuring you. There’s no deadline or promise of money and no incentive other than to get these experiences down on paper.”

This incentive—and his desire to share his passion for science—motivated him to push through these challenges. Both the content of his book and the cover reflect the happiness that science brings him.

“I think of science as a joyful activity,” Phillips said. “You start with a problem and work towards a solution. You can work on the same problem your whole life or many different problems, but science never ends. It’s done so much for us as a society.”