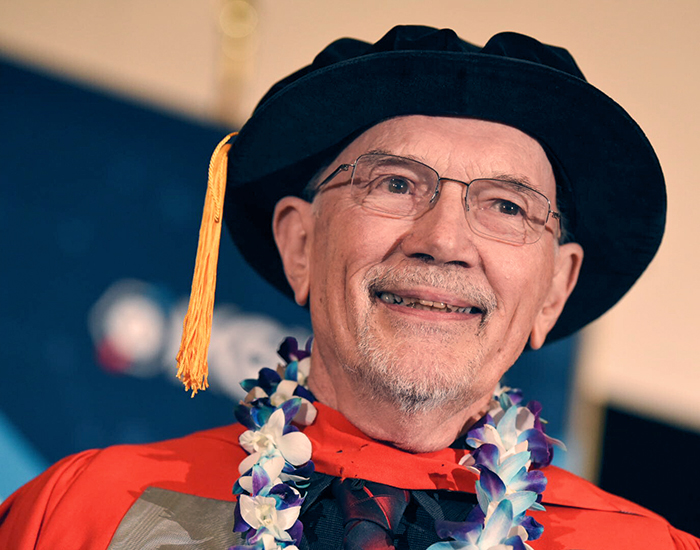 As he read the 2019 Keck Graduate Institute (KGI) Commencement program on May 18, Ian Phillips noticed that someone would receive a lifetime achievement award and wondered who it might be. Then the Norris Professor of Applied Life Sciences heard KGI President Sheldon M. Schuster call his name.

“I had no idea it was coming,” says Phillips, who became the first person ever honored with the award as he retires from KGI and becomes a professor emeritus. “The award recognizes my teaching and research. It means a lot to me. You know you have made an impact to receive this honor.”

Andrew Burns, PhD ’19, MS ’16, PPC ’14, is among those at KGI who have long realized the impact Phillips has on students. Burns first came to know Phillips during a Medical Brigades volunteer trip to Honduras in 2014 and subsequently joined his lab team at KGI.

“I feel like I’ve achieved a lot under his mentorship,” says Burns. “It has been an absolute honor to work with him. He’s so intelligent and always supportive. He has a wealth of information, and he’s always willing to share it. He is the best and most giving boss I’ve ever had.”

Phillips joined KGI in February 2006 after establishing a distinguished career at the California Institute of Technology; University of Iowa; and University of Florida, where he chaired the Department of Physiology and founded its Division of Functional Genomics. He served as the vice president for research at the University of South Florida in Tampa from 2002 until 2006.

At KGI, Phillips founded the Postbaccalaureate Premedical Certificate (PPC) and Master of Science (MS) in Applied Life Sciences programs. He also was the founding director of the Center for Rare Disease Therapies.

A strong advocate for people with rare diseases, Phillips organized KGI’s annual Rare Disease Day for 12 years and, with Assistant Professor of Biopharmaceutical Sciences Derick Han, served as faculty advisor to the student-run Rare Disease Club. He taught the Writing an Orphan Drug Application course in which he and his students were successful in gaining U.S. Food and Drug Administration (FDA) approval for eight orphan drugs, as well as courses on the molecular basis of disease and advances in gene and cell therapy.

“KGI changed my research interests,” says Phillips, who had focused on brain and cardiovascular research, gene therapy, and stem cell research. “I started having a deep interest in rare disease research and teaching.”

During his career, Phillips published a dozen books and more than 400 papers and reviews. Previous recognition for his work includes McGill University’s Lucian Award for cardiovascular research, a MERIT Award from the National Institute of Health for his research related to heart disease, two research grants from the Howard Hughes Medical Institute, and the Frank Annunzio Award for Science and Technology from the Christopher Columbus Fellowship Foundation. Phillips also was named a fellow of the American Heart Association and American Association for the Advancement of Science, and a member of the U.S. National Academy of Inventors.

Now that he is retiring, Phillips says, “It’s been a very enjoyable career. I genuinely will miss the daily interactions with students. I’m grateful to President Schuster for hiring me, and to the other KGI faculty who are wonderful people and make a difference in students’ lives.”

But Phillips intends to remain active. His anticipates traveling more and also enjoys painting, as he demonstrated in his artwork created for KGI’s 2017 Commencement speaker Kiran Mazumdar Shaw, the chairperson of Biocon, a leading biotechnology company in India and partner with KGI in the Biocon Academy.

Phillips plans to continue his involvement with KGI through his philanthropy. After establishing a new scholarship fund for students in KGI’s MS program in 2018, he is renewing his support this year.