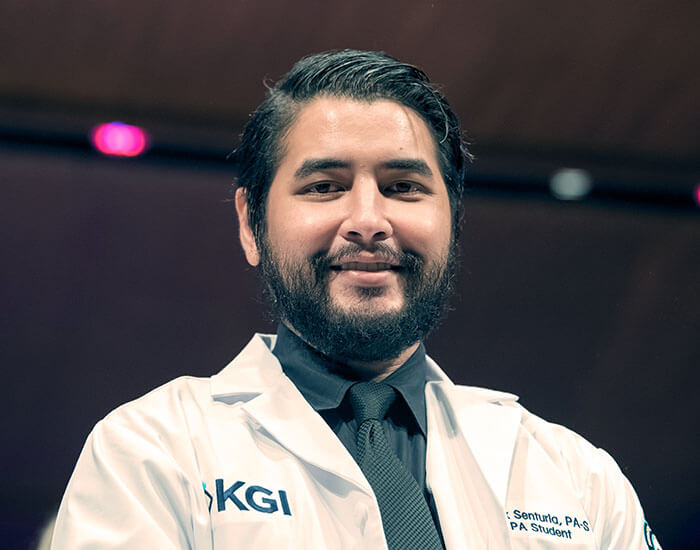 Keck Graduate Institute (KGI) student Alexander Senturia, MSPA ’24, is the second author of a “Notes from the Field” paper that the American Journal of Public Health recently accepted. The report, “A COVID-19 vaccination program to promote uptake and equity for unhoused people in Los Angeles County,” stemmed from Senturia’s work with the Los Angeles County Department of Health Services (DHS) during the COVID-19 pandemic.

As Senior Program Manager and EMT for the COVID-19 Response Team with Housing for Health (HFH), Senturia helped provide vaccines and other resources for people experiencing homelessness (PEH) throughout Los Angeles (LA) County. This includes people living in shelters, encampments, and otherwise impermanent living situations (such as motels or cars).

The report highlights the impact of the team’s COVID-19 vaccination program between February 2021 and February 2022. During this time, they could fully vaccinate 9,275 PEH, representing 14.6% of the total PEH population in LA County. This figure is imposing, considering the challenges they were up against.

“Los Angeles has the largest population of people experiencing homelessness in the country,” Senturia said. “Much of this population depends on charitable organizations providing food and services.”

“At the beginning of the pandemic in early March, because there was so much uncertainty surrounding COVID, we had to shut down, and many of these services vanished,” Senturia said. “What little lifeline these people had disappeared almost overnight. So, 66,000 plus people now had no access to food, housing placement, or medical care. That’s when our team was commissioned to come in.”

The COVID-19 Response Team (CRT) provided hygiene kits, tents, and food, delivering over 150,000 meals from March 2020 to July 2022. They set up quarantine isolation sites across LA County, converted hotels into hospitals, and began surveillance testing for COVID-19 and outbreak management.

“We also engaged in harm reduction by providing Narcan (an emergency treatment for narcotic overdose) and access to clean needles,” Senturia said. “Essentially, we did everything we could to support the community and build trust. We were very present in many of these people’s lives, which was a major reason our program had such a big impact. We weren’t just showing up and asking people if they wanted to be vaccinated.”

The team helped PEH remove barriers to vaccinating, engaged them in conversation, conducted surveys to understand reasons for vaccine hesitancy, and provided educational pamphlets and games designed to address the most cited reasons.

The precarious living situation for many unsheltered PEH—who make up 70% of LA’s homeless population—made second dose delivery challenging, and vaccine hesitancy was higher among this group due to government mistrust fostered by policies such as encampment sweeps. Unsheltered PEH were twice as likely unwilling to engage in vaccine education than sheltered PEH.

“Although we did our best to boost interest in the vaccine, one of our principles was that they must choose to get it and not feel pressured,” Senturia said. “Even if they chose not to, that didn’t stop us from delivering the other services and taking every measure to stop the disease from spreading.”

Senturia was tasked with developing and implementing a strategy for taking the very delicate mRNA vaccine into the field and delivering it directly to clients.

“It is sensitive to light, movement, and temperature—all factors that prevented other programs from attempting to do what we did until standards relaxed,” Senturia said. “At the same time, early on, we were under directives to only vaccinate individuals that met certain ages and criteria while not wasting any doses. You can imagine the logistical complexity, yet we did not waste a dose for the first six months.”

The vaccine program continued until June 30, 2022.

In addition to preventing the spread of COVID-19, the CRT also addressed other communicable diseases, including sexually transmitted infections (STI)s, providing free testing, treatment, and referrals.

“We found significant data for a few thousand individuals concerning outbreaks of various diseases such as syphilis, gonorrhea, and HIV,” Senturia said. “Previously, the Department of Public Health didn’t have much information on this population in terms of disease burden.”

Before joining the DHS, Senturia was a COPE Health Scholar. COPE, a KGI partner, is an organization that pairs local hospitals with students interested in pursuing careers in medicine or research.

“That was an enlightening experience because I had been working as an EMT previously, and I only had one perspective on the nature of disease,” Senturia said.

“With COPE, I saw how disease impacts people from a sociological angle. There’s almost a different subculture tied to each situation, depending on who they are, where they come from, and what illness they’re experiencing.”

Now Senturia is undergoing his first year in KGI’s inaugural Master of Science in Physician Assistant Studies (MSPA) program. He appreciates the level of engagement between students and faculty, particularly Program Director and Professor of Practice Dr. Christy Eskes.

“You can tell our faculty are very excited because they’ve been working on this program for so long, and we’ve finally shown up,” Senturia said. “Dr. Eskes is very enthusiastic and wonderful to work with.”

“As a first-year student in our inaugural cohort, Alex has been able to bring his experience into the classroom,” Eskes said. “His experience working with Housing for Health has brought richness to our Community Health course as he shares his experiences supporting vulnerable populations. We could not be prouder of Alex and what he has accomplished to date, and we know he has a great future ahead of him as a PA.”

When it comes to his medical career, Senturia is interested in potentially going into emergency medicine or infectious disease.

“My experience with the COVID response teams gave me a great appreciation for working with underserved populations—specifically people experiencing homelessness in LA,” Senturia said. “The work we did around street-based care is an emerging field in medicine, and it’s one of those spaces where there’s much room for innovation. Once I finish this program, I’m excited to get my foot back in the door.”