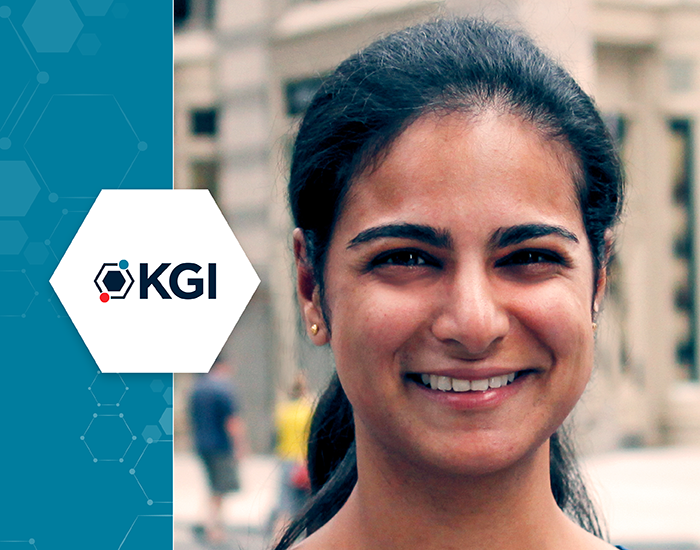 Keck Graduate Institute (KGI) alumna Ramya Kartikeyan was recently named to 2022’s Medical Marketing & Media (MM+M) Women to Watch list, which honors women who have made noteworthy accomplishments in the medical marketing business. She also received the organization’s 40 Under 40 Award for 2022.

Kartikeyan’s achievements extend beyond the world of marketing. As an undergraduate intern, she contributed to the initial research that helped GSK develop the malaria vaccine approved in 2021. As a doctoral researcher, she discovered mechanisms controlling the production of tumor proteins that caused devastating neurodegenerative disease from JC polyomavirus infection.

One aspect of working as a bench scientist that Kartikeyan found frustrating was not getting to play a more significant role in whether the therapies she worked on ever reached the market.

“I was working on a project with Biogen to test a drug on the disease that I studied,” Kartikeyan said. “Once we finished delivering our investigational results, which were favorable, it just went away. Which is disappointing after you’ve spent a year working on it.”

She began to get curious about taking a product to market. With this in mind, she considered applying for Cornell’s Johnson School’s accelerated MBA program, which was also STEM-focused.

She was close to completing her PhD in Biochemistry and Molecular Biology from Penn State University. She knew she needed to see if there were other more biopharma-focused degrees. At her weekly journal club, a friend told her about KGI.

Kartikeyan realized that KGI’s biopharma-focused programs offered many of the same benefits as the Cornell program, specifically focusing on what interested her. She enrolled in KGI’s Postdoctoral Professional Master’s Program in Bioscience Management, a nine-month program tailored to PhD students and postdoctoral fellows with science backgrounds, providing them with the business, management, and networking skills needed to transition into industry-related careers within the life sciences successfully.

“It was a big change, graduating from the very comfortable sense of a PhD program where you feel like your life is figured out—you know you’re going to be a scientist in a lab,” Kartikeyan said.

“But I think making the plunge was the right choice—obviously because of where I am now, but also because of everything I learned. It was total immersion.”

She values working with such faculty as Professor of Management Dr. Steven Casper and the friendships and connections she developed with classmates at KGI. One classmate even helped her land a position as Senior Healthcare Analyst in Infectious Diseases at GlobalData, where she learned skills that she still uses today in her current role as Senior Director of Market Intelligence for Myriad Genetics.

In medical marketing, one of Kartikeyan’s notable accomplishments was for Intouch Seven, where she helped launch the V Is For Vyvanse campaign for Takeda’s ADHD product in 2020. Her team earned the 2020 Manny Award for the Best Use of Immersive Technology for Ben’s Room; a VR experience focused on highlighting the disease burden of ADHD in Ben, a prospective young child.

“The purpose was to reveal not only the burden of these symptoms on the child but also on the parent or caregiver,” Kartikeyan said.

The VR allowed viewers to experience life through the perspective of Ben’s mother, revealing house scenes and social interactions that paint a realistic picture of what life looks like for an undiagnosed and untreated child with ADHD.

“In this way, we were helping physicians to understand that you’re not just treating that person, but you’re helping that person to maintain their social life and influencing how they interact with the people around them who love them,” Kartikeyan said. “And we are creating a sense of empathy for what this child’s going through, even if he can’t articulate it.”

Now at Myriad Genetics, she can utilize all her skill sets—including scientific research and market analysis—while honoring her original goal, which is to obtain more profound knowledge of all the elements involved in bringing a drug to market. She works with multiple teams, including business development and marketing, to help them determine the salient information when presenting their product to internal executives or external stakeholders.

Kartikeyan’s rich and varied career trajectory reflects the unique qualities she brings to the table. First, her extensive science background makes her a rarity in marketing. Additionally, she only recently became a U.S. citizen after 20 years of navigating different visa requirements and thus offers the perspective of living in other countries and experiencing their healthcare systems.

She emphasizes the value of expanding one’s horizons regarding career options.

“You can grow your repertoire and gain experience in myriad ways,” Kartikeyan said. “It’s myopic to think that the only outcome you can expect is to go to a company and work within a specific function.”

She received some advice that still resonates as a student at Penn State, where she had lunch with a man who had worked for GE and in the fields of sports medicine and medical diagnostic equipment.

“He told me that it is outdated to believe you will have one job for your whole life,” Kartikeyan said. “I’ve taken that to heart. I’m approaching every job from the angle of what it will allow me to learn. You cannot learn everything in one role or even at one company. That was a very freeing piece of advice.”

For Casper, Kartikeyan’s success reflects her character and years of dedication to the sciences.

“Ramya Kartikeyan is an exceptional bioscience industry executive and leader,” Casper said. “I had the pleasure of working with her in classes and on a team-based project during her time at KGI. She showed exceptional teamwork skills and empathy. I’m not surprised she was selected for the MM+M Women to Watch list. We are so proud of her continued success!”