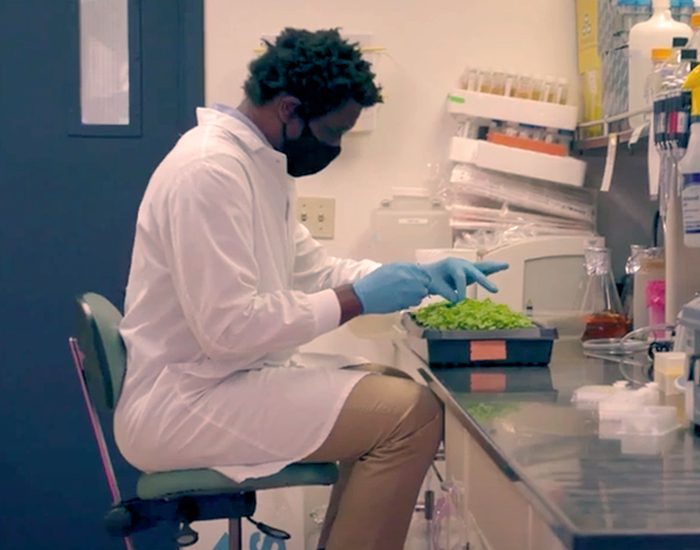 For the past 11 years, Keck Graduate Institute (KGI) Dean of Research and Research Professor Dr. Larry Grill and his team have worked on producing low-cost vaccines for developing countries, primarily focusing on animal diseases that significantly impact smallholder farmers in Africa. Because getting human vaccines approved in the U.S. typically takes 10 to 15 years, Grill had never considered pursuing this route.

However, with the emergency use authorization brought on by the pandemic, Grill is now working to adapt the vaccine for use against COVID-19. This vaccine is distinct from the COVID vaccines currently on the market in that it is derived from plant viruses.

Plant viruses do not cause diseases in humans, but your immune system will make antibodies if a plant virus comes into contact with these viruses. As such, viruses from plants can train your immune system to respond appropriately to foreign invaders if the plant virus is “costumed” with a surface protein that looks like a pathogen.

To take advantage of this feature, Grill and his team changed the outside surface of the plant virus to resemble a real pathogen. Using a virus coat protein fusion, they added the genetic information from a SARS-CoV-2 spike protein to the surface of a Tobacco Mosaic Virus (TMV).

The TMV fused coat proteins are taken up by the APCs (antigen presenting cells) and displayed on Class II MHC molecules. The Class II molecules interact with the CD4+ (“helper”) T cells to trigger an appropriate cellular immune response.

“Your immune system detects the virus and makes antibodies against the SARS-CoV-2 spike protein,” Grill said. “As a matter of fact, the data that we have shows that memory cells would be ready for the SARS-CoV-2 virus for at least a few years.”

Additionally, they can continue to grow the TMV vaccines in plants, allowing them to produce large amounts of what Grill calls “decorated viruses” in the sense that a pathogen surface protein has been added to the plant viruses.

“They have a lot of cattle there,” Grill said. “In fact, they have more cattle than humans, and cattle are very important to their economy.”

Cattle in Botswana have been afflicted with Lumpy Skin Disease (LSD), resulting in reduced milk production, sterility in bulls, damage to hides, and death from secondary bacterial infections, which in turn leads to severe nutritional and economic losses.

After fusing several LSD coat protein peptides to the TMV coat protein to create a vaccine, Grill and his team began vaccinating cattle. Botswana Vaccine Institute assisted with the trials as they collected serum samples every two weeks to check the antibody response.

The results were encouraging, showing that the cattle produced specific antibodies until around day 14 of the trials. “At this point, there’s no more virus in their body, so they stop making antibodies,” Grill said. “At the same time, they save the memory cells that are protective against the LSD. So now when they’re challenged with the actual LSD virus, they respond very quickly because they have all the right antibodies, and these cattle are not affected by the disease.”

In April 2020, Grill and his team shifted their focus to designing and producing low-cost COVID-19 vaccines. They are working with Botswana Vaccine Institute and the Botswana government to secure funding to build a facility in Botswana and produce the vaccines.

Their goal is not to compete with the big pharma vaccine companies but rather to produce a low-cost vaccine for developing countries. Compared to vaccines produced in the U.S. and Europe, this vaccine is very affordable to develop.

Production plants are grown in growth rooms, leaves are harvested 8-10 days post introduction, and the TMV vaccines are purified via a simple precipitation step. Additionally, the virus is very stable and unlike some current COVID vaccines on the market such as the one produced by Pfizer, it doesn’t appear to need to be stored at extremely cold temperatures (which can be problematic when transporting the vaccine to developing countries). In addition to cost and ease of production, Grill sees other advantages.

“The Johnson and Johnson and AstraZeneca vaccines use viruses that actually replicate in your body,” Grill said. “If people are immunocompromised, it can be problematic. However, our virus cannot replicate in humans.”

Thus, Grill’s vaccine may be safer for immunocompromised individuals. While they haven’t started human trials, they have begun conducting trials with mice.

“In our first set of animal trials, we found that the mice make good antibodies, but we don’t know whether these antibodies can neutralize the virus,” Grill said. “So we’re now conducting another set of trials with the J. Craig Venter Institute in San Diego. If it’s successful, then our plan is to go to Botswana and build a facility in hopes that we can actually finish it in time to protect people against COVID-19. But if it does take longer, we know this is not the last pandemic.”

Another benefit of this vaccine is that it can protect against many different strains at once because they are not limited to using one protein.

“We can put many different proteins into the plants because it’s the same cost to make the vaccine,” Grill said.

Grill appreciates his KGI research team—including Phiri, a post-doc from Zimbabwe who has worked with him for many years—for the passion and commitment they bring to the endeavor.

“These students work in my lab because they enjoy it, and they really understand what we’re doing,” Grill said. “I don’t have to explain—for example—how to genetically add the sequences to the plants because they already get it. They really get excited about the work.”