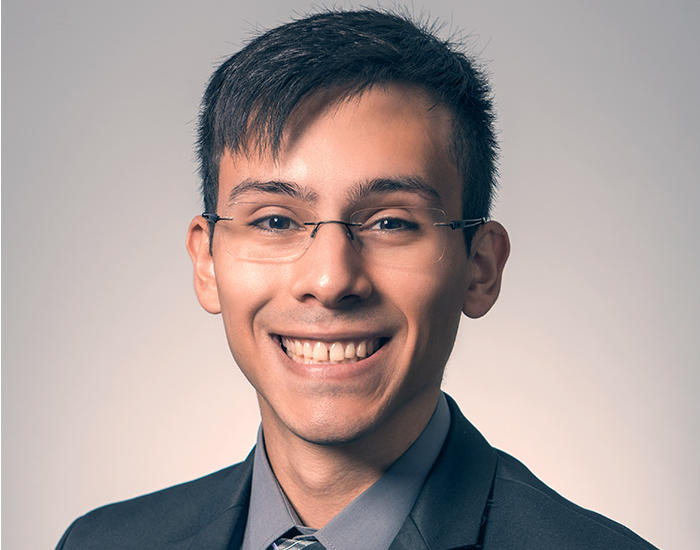 Genomics is a rising field, yet the wealth of research has been conducted on people of European ancestry. Gubidxa Gutierrez Seymour, MSTM ’20, a Keck Graduate Institute (KGI) and Irell & Manella Graduate School of Biological Sciences at City of Hope (IMGS) student in the Master of Science in Translational Medicine (MSTM) program, is working to expand our knowledge base to include Latin America.

His poster “Origin and Distribution of Recurrent CHEK2 and PALB2 Germline Variants Among non-BRCA1/2 Breast Cancer Susceptibility Genes in the Americas,” which won second place at the KGI Research Symposium, examines the ancestral and genomic context of breast cancer among Latinas.

“These recurrent variants were identified in BRCA-negative Latinas with breast cancer,” said Gutierrez Seymour. “The CHEK2 variant is particularly interesting because it’s only been observed in Latinas and was previously classified as a Variant of Uncertain Significance (VUS) but is associated with a three-fold increased risk of breast cancer.”

“On my father’s side, I am Zapotec, which is an Indigenous people of southern Mexico,” said Gutierrez Seymour.

“So for me, it’s personally rewarding to go back to my roots and perform research that is informative for Latinxs with Indigenous ancestry.”

Currently, Gutierrez Seymour is working at City of Hope in conjunction with MSTM. His group at the Division of Clinical Cancer Genomics is focused on a service called Genetic Cancer Risk Assessment (GCRA), which identifies an individual’s risk for cancer and then recommends treatments, risk-based screenings, and/or preventive measures based on this information.

Recently he traveled with members of his research group to Mexico for a week, where he participated in roundtable discussions with local clinicians, scientists, and community members about the barriers and promises of GCRA in Mexico.

One barrier is cost. A comprehensive genetic testing panel in Mexico costs about $274 because they must order the tests from the United States. In Mexico’s economy, $274 is more difficult for the average citizen to afford than in the U.S.

Another barrier is misunderstandings and fears around genetic testing. This barrier can be mitigated by raising awareness among clinicians and patients about the utility of genetic testing as well as addressing any concerns.

“In the context of Mexico and Latin America, GCRA has the potential to help maximize the benefits of screening and prevention within their limited-resource settings,” said Gutierrez Seymour. “Identifying individuals at increased risk of cancer due to genetic alterations can help focus those limited resources on these individuals to, quite literally, save lives.”

Gutierrez Seymour received his bachelor’s in Exercise Science from California Lutheran University. He credits his undergraduate professor Dr. Michele LeBlanc for providing him with his first opportunity to perform research, which spurred his passion for it.

What appealed to him about KGI’s MSTM program was its emphasis on the practical applications of research combined with a grounding in business and ethics. At KGI, he states that program directors Dr. Anastasia Levitin and Dr. Yilun Liu have been very helpful and encouraging, while Dr. Animesh Ray has deepened his understanding of critical analysis.

Gutierrez Seymour plans to become a physician who can integrate translational research, exercise science, and precision medicine to enhance the health and well-being of his patients and their families.

“A big promise of precision medicine is to tailor treatments and care to the right person at the right time, and I believe that includes people in underserved and limited-resource settings,” said Gutierrez Seymour.