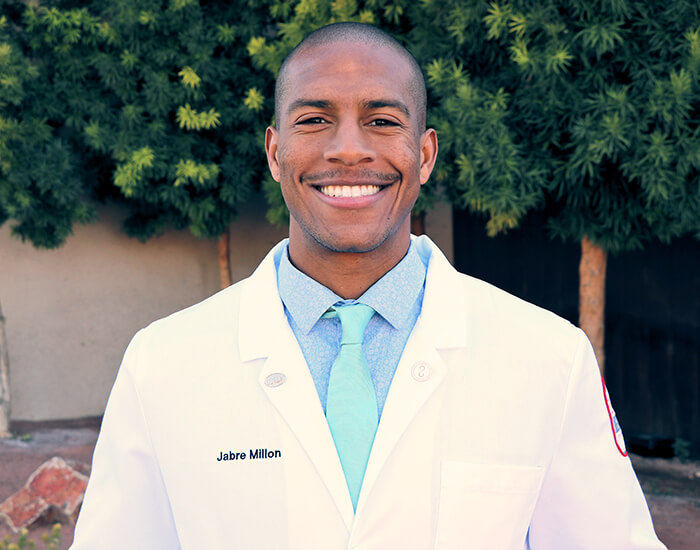 As a 16-year-old, Keck Graduate Institute (KGI) alumnus Jabre Millon, PPC ’18, had dreams of becoming a doctor and joining the Olympics. He was a committed student and track and field star, and though his parents were divorced, he still had a strong relationship with his father, whom he saw regularly.

Then his whole world changed when he received a knock at the door from his uncle, announcing that his father was dead. He would soon learn that his father had been entangled in a domestic situation, murdering Millon’s stepmom and her boyfriend before getting shot by the police after he refused to drop his weapon.

Simultaneously coping with his father’s loss, this news (which put his father in a new light) and the nonstop media coverage that followed proved to be a perfect storm. Millon lost all interest in school and athletics.

“Ultimately, what happened with my dad is something that I’ll have to live with the rest of my life, so being able to accept and move on from that has played a huge role in where I am and who I am today,” Millon said.

During this time, two events played a pivotal role in Millon’s ability to work through his emotions. One was opening up to a sports psychologist at USC, who showed him the healing power of talking about your feelings with others.

The other was volunteering at a hospital, where he brought water and blankets to patients and—most importantly—connected with them by engaging them in conversation. This fueled his desire to help others through the medical profession.

After graduating from USC in 2015, he applied to medical school but didn’t get in. This ultimately worked out for the best, as he eventually applied to KGI’s Postbaccalaureate Premedical Certificate (PPC) program so he could become a more competitive applicant, starting in 2017.

At KGI, Millon felt that the collaborative work environment and opportunity to take entrepreneurial classes helped to further his growth and the mentorship of PPC directors Joon Kim and Elba Muñoz.

“I didn’t have a lot of mentorship before KGI and did the medical school applications process on my own the first couple of times, so having the resources and Joon and Elba there to walk me through every step of the process was very helpful,” Millon said.

One of his biggest challenges at KGI was the semester-long collaborative project, but it was ultimately informative as it taught him how to collaborate in high-pressure situations. He learned how to judge when it was appropriate to step up and take control and better step back and take direction.

Now, Millon is two years away from graduating from the University of Nevada, Las Vegas (UNLV) medical school. At UNLV, he has been involved with the community, mentoring local pre-meds and high-school students and volunteering at the Boys and Girls Club.

He hopes to potentially go into orthopedic surgery or interventional radiology. For those just entering medical school, Millon recommends going in with positive expectations.

“I think medical school is awesome,” Millon said. “People look at me like I’m crazy when I say that, but it’s ultimately what you make of it. Also, one test is not going to define your future. Take time to appreciate the small things in life and spend time with your friends and family.”

Millon says that his tragedy has helped him put everything in perspective and shaped his desire to give back to others.

“Jabre has had some extreme highs and lows in his life, but rather than turn inward, he uses his experiences to motivate himself towards serving others,” Kim said. “I’ve had so many different students tell me how Jabre had helped them during their time at KGI. I have no doubt Jabre will make a significant impact on the lives of so many people through his career!”

“Jabre is immensely humble, resilient, personable, thoughtful, and compassionate!” Muñoz said. “He is someone who truly enjoys giving back to his community and goes out of his way to help uplift others in so many positive ways. It is my absolute honor knowing Jabre, and he will soon be the physician leader that our community needs as a role model. In my almost 10-year tenure as an educator, I have never met someone like Jabre!”