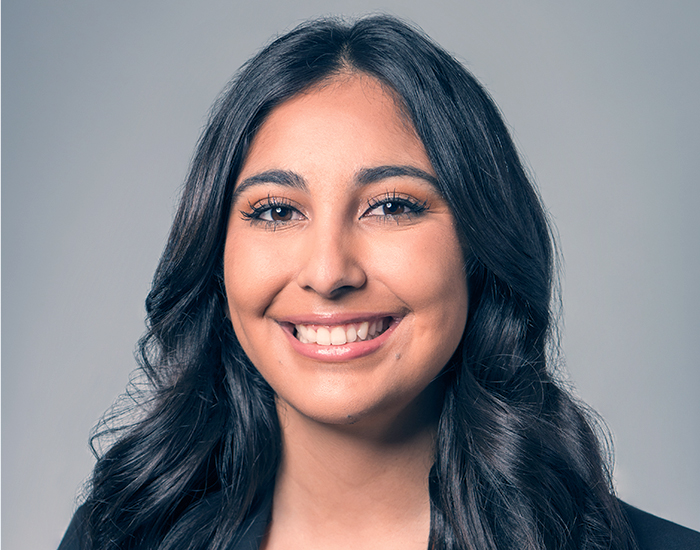 Raised in the World of Professional Boxing, PPC Student Nicole Diaz Discovers the Fusion Between Sports and Medicine

From an early age, Keck Graduate Institute (KGI) student Nicole Diaz, PPC ’22, has witnessed the wonders of medicine in an unusual place—professional boxing. Her family has long been involved in the industry. Her grandfather grew up fascinated by boxing in East Los Angeles and went on to open his gym, where many prominent boxers such as Oscar De La Hoya trained when they were first starting.

Following in his footsteps, Diaz’s father has been promoting and managing boxers since he was 18. Although Diaz is not a boxer (she’s played soccer her whole life), she enjoys watching the sport.

She observed how physicians would quickly repair injuries that boxers had sustained in the ring during matches, treating bruises and stitching up cuts—even serious cuts to the head—using a staple gun. Not only are the doctors on the sidelines during the fight, but they stay with the boxers through the entire process, beginning with weigh-ins.

“For the weigh-ins, the fighters have to hit a certain weight, and the doctors are there to make sure that if they’re dropping 20 pounds, for instance, they’re doing it healthily,” Diaz said. “Before, I’d just associated doctors with the hospital, so I thought it was super interesting how a doctor could be involved in sports. It combined two of my favorite things: sports and medicine.”

Witnessing the miracles of medicine, as doctors efficiently and effectively treated injured fighters, inspired Diaz to pursue medicine as a career. However, it has not been a straight path.

She attended a private high school where she graduated top of her class. However, when she began her undergraduate education at UCLA as a Biology major, she saw just how competitive the medical field was.

“At UCLA, I realized there’s tons of students who are just like me or better,” Diaz said. “I thought to myself, ‘How am I going to make it when all of these amazing students are pursuing the same thing?'”

However, during her last two years at UCLA, Diaz’s passion for medicine began to overshadow her doubts, and she convinced herself to continue on the path.

“I realized that medicine is what I want to do with my life,” Diaz said. “When I was accepted to KGI, I knew for sure that medicine was my route.”

This is not to say, though, that insecurities do not still crop up from time to time. Before starting KGI’s Postbaccalaureate Premedical Certificate (PPC) program, she wondered how she would measure up to her classmates. Her experience differs from that of the typical medical school applicant.

“I did some research and volunteering my freshman year at UCLA, but during the whole time when I was questioning whether I wanted to go to medical school, I was more involved in pursuing a marketing route,” Diaz said. “I started a YouTube channel that featured my life at UCLA—how I got in and what I do—that blew up for some time, gaining 15,000 followers.”

Thus, although Diaz was very successful in her endeavors, she felt that creating her videos and marketing them were not necessarily relevant for medical school. In the initial weeks of KGI’s PPC program, though, Diaz is beginning to let go of her beliefs about where she should be compared to her classmates.

“It’s exciting to meet so many students who are aspiring to be in a similar field as mine,” Diaz said. “At UCLA, with such a big campus, you meet tons of students who want to do lots of different things.”

At KGI, by contrast, she’s surrounded by students who all want to work in the medical field, which motivates her because everyone is working towards the same goal.

“It’s not a competition but more of a collaborative experience,” Diaz said.

Among her classes, she particularly enjoys “Pharmaceutical Discovery” with Dr. Derick Han.

“I’ve never studied pharmacology, but everything he’s been teaching so far has been super interesting,” Diaz said. “I am understanding the information and able to talk to my family members about it. That’s how I know I like the class—I want to have further conversations about the material. When I’m doing homework or studying for it, it doesn’t seem like a chore.”

Diaz is looking forward to the rest of the semester.

“Nicole is an enthusiastic and curious student with a strong background from UCLA,” Han said. “It is a pleasure having her in class at KGI.”

As a physician, Diaz hopes to go into either reconstructive plastic surgery—like the doctors who treat injured boxers—or pediatrics.

“Kids are so amazing,” Diaz said. “I’ve seen my little sister—who’s six—grow up, and I’ve observed how she picks up little things that I say and my mannerisms so quickly.”

Beyond preparing academically for medical school, one of her main goals in the PPC program is to create a robust support system.

“I’ve been lucky at KGI to meet students who are supportive and want one another to reach and obtain their goals,” Diaz said.

“Everyone has been amazing, from the students to the administration and teachers and advisors. I’m really loving the program.”