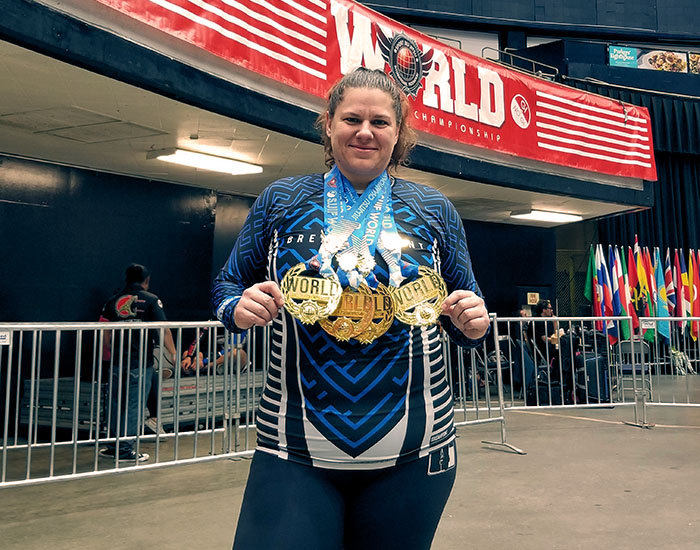 Outside of her day job as the Keck Graduate Institute (KGI) Director of Business Services, Erin Quillen is spending her free time becoming a world-class competitor in Jiu-Jitsu.

This win was all the more remarkable considering the fact that Quillen has only been training for two years. In addition to working full-time as a KGI staff member, she still manages to fit in 20 hours of training per week.

However, Quillen never imagined that she would take up jiu-jitsu.

“I’ve always been a competitive athlete,” said Quillen. “I grew up swimming, but I had gone away from athletics for a really long time and gotten really out of shape and was living an unhealthy lifestyle. I knew I needed to do something, and I always do better when I have a coach.”

She joined the UFC Gym, where she took kickboxing classes. Her husband was interested in Brazilian jiu-jitsu, and he encouraged her to train with him.

Eventually Quillen gave in, and at first she hated it.

“I don’t know what happened—maybe it was Stockholm syndrome—but eventually I fell in love with it, and the rest is history,” said Quillen.

“As soon as I got bitten by the bug, I just started training as much as I could, and then I started competing shortly thereafter.”

Quillen first began training with Craig Turner, a black belt coach, who motivated her to start competing. Eventually she transferred to Fight Studio, where she studies under world champion Lucas Leite.

In jiu-jitsu, competitors fight either with or without a gi, which is a traditional heavy cotton uniform that consists of drawstring trousers and a belt. Quillen prefers the gi as she can use it to her advantage.

“You can hold onto the gi, you can grip it, you can use the lapel for different types of submissions,” Quillen said. “In no gi, there’s nothing to hold onto; it’s just you and your partner.”

In the SJJIF championships, Quillen won gold in both the gi and no-gi categories in her weight division as well as open-weight, which pits her against all competitors.

One of Quillen’s biggest challenges came near the end of the open-weight no-gi finals match, when she and her opponent were tied. Her opponent went for an armbar, which is a move that hyperextends the elbow. The armbar often causes the recipient to tapout (quit), as it is quite painful and can even lead to a broken arm. However, Quillen uses it to her advantage.

“Because I’m quite strong, I’ll let them take the armbar, but then I will swivel around and stack my opponent,” said Quillen. “I will put them up on their shoulders and neck, and I will get my arm free. I’ll be able to not only reverse it but also pass their guard and get into side control.”

This is what Quillen did when she found herself in an armbar this time, which gave her points in the last ten seconds to win the match.

Quillen’s goal is to become a black belt world champion and possibly open her own academy one day. To women who are hesitant to pursue martial arts, Quillen agrees that it can be intimidating. But she encourages them to push past their fears, as martial arts and specifically jiu-jitsu can empower them with an arsenal of self-defense tactics.

She describes jiu-jitsu as humbling and often frustrating, but she’s excited to see her progress both in her health and her mastery of the sport.

“It’s completely changed my mindset about life in general,” said Quillen. “The whole goal is to be better than what you were the day before. A lot of what you learn through jiu-jitsu is so applicable to other parts of life.”