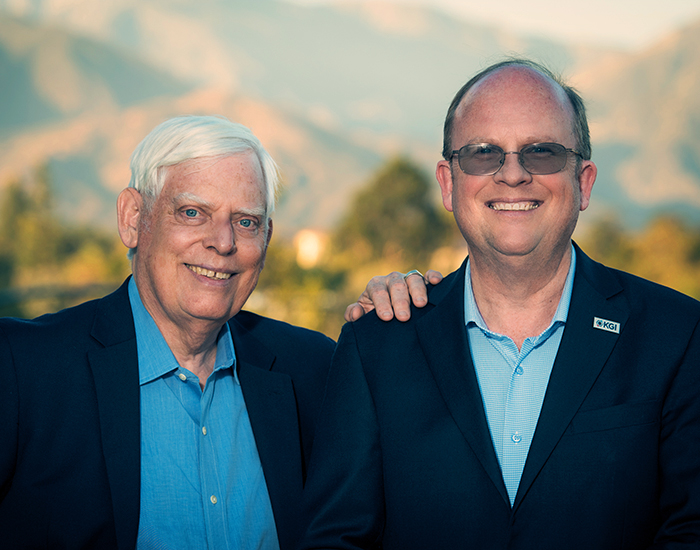 When Robert E. Curry joined the Board of Trustees, Keck Graduate Institute (KGI) had just one academic program and barely 50 students. He makes way 14 years later for a new board chair who will guide a very different school, one with more than a dozen programs and 600 students. And KGI continues to grow.

“I joke with Shelly [KGI President Sheldon Schuster] that KGI is the most successful startup I was ever involved with, and I’ve been involved in 35 to 40 companies, either starting them or providing funding and expertise in the early stages,” says Curry, CEO of PerceptiMed, Inc. and a venture capitalist since 1986.

When Curry first engaged with KGI, it was little more than an idea proposed by Henry E. Riggs, who would become the school’s founder and first president. Curry joined the KGI Board of Trustees in 2000 and was named chair in 2004. Now he is ready to turn its leadership over to incoming chair James F. Widergren, who has served on the board since 2009 and previously on KGI’s Advisory Council.

“I’m happy to hand the baton off to Jim. He’s been involved in depth in all that we’ve done in the past 10 years, so he has all the skills and the context.”

A graduate of Harvey Mudd College, Widergren is the president and CEO of Orgentec Group, a medical diagnostics company based in Mainz, Germany. His 25 years of experience in the diagnostics industry includes service as senior vice president of global customer operations at Beckman Coulter, where he involved KGI students in company projects and hired graduates.

“I like the fact that KGI is closely aligned with industry. There’s also a lot of creativity within the administration and faculty. It’s a unique place and an organization that is going to continue to be a leader in the education methods of the future,” says Widergren.

Like Curry, Widergren views KGI as a successful startup. They each point to KGI’s creation of a pharmacy school that prepares graduates for changing roles in healthcare and industry, new academic programs, and development of a residential campus as evidence of the school’s innovation and growth.

“We had a vision of expanding KGI into a number of specialties within the umbrella of the original mission,” says Curry. “The School of Pharmacy and Health Sciences is an expansion of that concept. Now we want to build a medical school where our graduates are first-class physicians who understand medical device and diagnostic trials and can bring all their skills to deal with the issues involved in medicine today.”

As a board member, Widergren has participated in the planning processes for KGI’s pharmacy and medical schools. Now he will use his engineering and finance backgrounds and industry connections to help KGI succeed in its next phase of growth, spending considerable time bringing KGI’s medical school to fruition.

“We’re developing new programs that are relevant to industry and driving the future of the life sciences, pharmacy, and healthcare,” says Widergren. “There’s a lot going on that is taking KGI to the next level.”