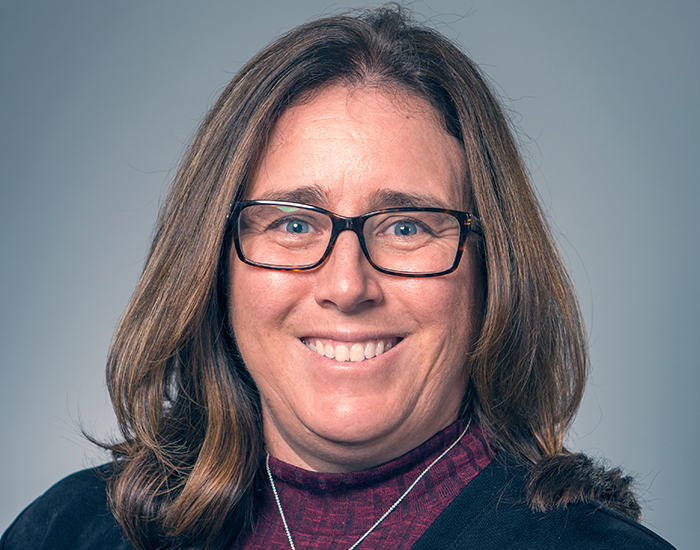 Professor Stacey McIlroy joined Keck Graduate Institute (KGI) in August 2021 as Principal Faculty in the Master of Science in Physician Assistant Studies (MSPA) program. However, her relationship with The Claremont Colleges extends to her undergraduate years. She received her bachelor’s in Political Science and Economics from Claremont McKenna College (CMC) in 1990, where she played basketball for all four years and softball her senior year.

As a basketball player, her accolades are numerous, including leading the team in scoring for three years and being named Player of the Year and a West Region All American. In 2010, she was inducted into the Hall of Fame.

“It was a great time, and I wouldn’t trade having gone to The Claremont Colleges for anything,” McIlroy said. “At the same time, I always tell people that attending CMC was a life-changing event for me not because of the athletics but because the athletics opened the door academically for me. Additionally, the lifelong relationships that I forged at the Colleges are still the most imminent and important in my life now.”

Though she had been a good student in high school, she had always focused more on athletics than academics. However, when choosing colleges, her parents advised her to consider the academic opportunity the school would provide and not simply the strength of the school’s athletic program.

“I would have been able to play at some other Division 1 schools, but my parents wisely told me, ‘Your athletic career isn’t going to be what carries you for the rest of your life,'” McIlroy said.

Her parents encouraged her to go to a school like CMC, where she would be held accountable academically.

“I quickly realized that my academic performance mattered,” McIlroy said. “I wasn’t just showing up and turning in a test. I had to have some intellectual integrity, and what I thought about the matter.”

After graduating from CMC, McIlroy worked in healthcare consulting to pursue a career in healthcare administration or public health. However, as she began working in the healthcare environment, she realized she was more drawn to the clinical side.

This realization led her to obtain a Master’s of Medical Science in Physician Assistant Studies at Midwestern University in Arizona.

“I knew this was a big leap because I would have to go back and take all my prerequisites,” McIlroy said.

At CMC, she had only taken classes in the social sciences—not the hard sciences. However, because her parents were still Arizona residents, she was able to move back to Arizona and work as a paramedic firefighter while completing her prerequisites at the University of Arizona.

“It was great because I could work a 16-hour or 24-hour shift, go to class for three days, and then work another shift,” McIlroy said. “So I was getting great clinical experience and on-the-job training as a paramedic at the same time.”

Since completing her master’s, she has had a flourishing career as a physician assistant (PA), working in urgent care, trauma services, and orthopedics. She worked in orthopedic surgery at Mayo Clinic for 12 years and has extensive experience in Level 1 Trauma Care. She often acts as the sole provider for full-service urgent care or as First Assist in all trauma services cases.

She has been employed at Kerlan-Jobe Orthopedic Institute at Cedars Sinai for the past three years, where she still works clinically one day per week. Additionally, McIlroy has 10 years of experience as an instructor in academic medical settings, including teaching orthopedic surgery as a preceptor at the Mayo College of Medicine.

Now, she is excited to share her expertise with KGI’s first cohort for the MSPA program beginning in the fall of 2022.

“I am new to academics, and at KGI, I’ve been so impressed with how we look at the big picture when evaluating students,” McIlroy said. “It’s not just about your GPA or test scores but about your authenticity and what you bring to the table.”

She believes that this element is vital for the future of healthcare leadership.

“In our PA program, we recognize that healthcare needs a change, and we’re poised to produce the types of leaders who will make a difference in policy and how we deliver healthcare,” McIlroy said. “To come home to The Claremont Colleges and be part of the instructional faculty is pretty amazing to me, and I feel very grateful.”

While McIlroy embraces her reunion with Claremont, her daughter—a graduating high-school senior—will be celebrating a new beginning. She will be starting classes at CMC in the fall, thus carrying on the family tradition. She will also be part of the CMS volleyball team.

“I’ve raised her almost primarily on my own, and she’s grown up with all my involvement in Claremont,” McIlroy said. “I think she’s seen the difference it’s made, and she’s super excited to be a part of all that.”