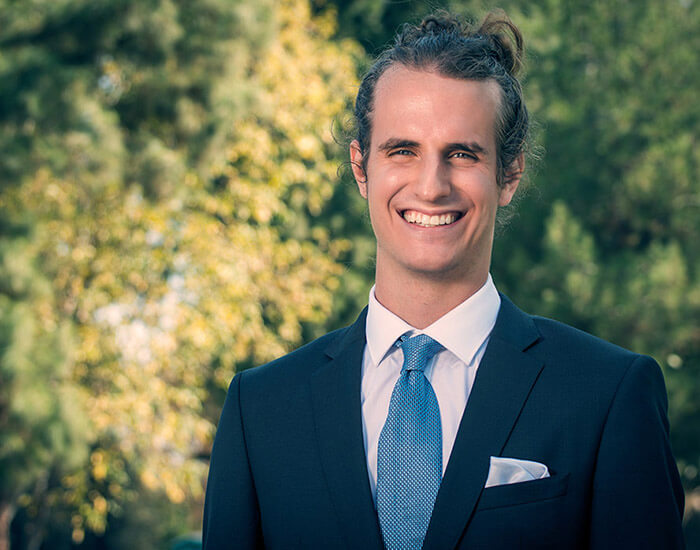 Student Seeks to Make a Global Impact Through Science, Business, and Education

No student has been part of the research project involving the University of Botswana, Botswana Vaccine Institute, and Ferré/Marquet Vaccine Research Center longer than Benjamins. He started in Botswana in 2014, continuing the work with Grill in Claremont. Then, Benjamins received the Napier Award for Creative Leadership from the Napier Initiative, a partnership of the Claremont Colleges and the Pilgrim Place senior community. That award, which recognizes outstanding leadership ability and commitment to social justice, enabled him to return to the University of Botswana to investigate a potential vaccine for rabies.

“It’s unusual for a student to go back, and he pursued the grant on his own,” says Grill, noting that he includes undergraduates in the project to increase their exposure to and interest in global health. “Eric is the most enthusiastic person you can be around. He seems like he has more energy than can be contained. Eric is in the first year of the MBS, so he isn’t doing the research right now, but he still comes to lab meetings and will be back in the spring.”

Benjamins first discovered the opportunity to work with Grill through a visit to Pitzer’s study abroad office. At the time, he was a pre-veterinary student. “They said there was a professor working with the University of Botswana, where they’re making vaccines for animals,” he recalls. “I thought this would be powerful for my personal and professional development. It definitely expanded my global view. I saw disparities in healthcare and education that motivated me to want to make a difference.”

Like other students who joined Grill in Botswana, Benjamins began by learning the technology the researchers are using to make vaccines. Says Grill, “Eric brought a little bit of knowledge about the veterinary field, but the technology and the whole idea of genetically altering a virus and getting a plant to express a virus were new to him.”

Benjamins also describes his introduction to the work in Botswana as involving a “steep learning curve,” and he was living in an unfamiliar culture for the first time. Yet, by the time he returned in 2016, he was prepared to help train PhD students in the technology while conducting his own rabies research. In addition, Benjamins assisted with teaching, oversaw the lab, and became involved with student and community groups.

“He took it upon himself to improve the education of students. He started a molecular biology club for undergraduates and got involved in a youth clinic in one of the villages,” says Kelvin Phiri, a postdoctoral student at KGI who was finishing his PhD and working as the lab manager at the University of Botswana when Benjamins arrived the second time.

Benjamins also impressed University of Botswana associate researcher Kefentse Tumedi, who notes, “Eric was an integral part of the research group who always contributed positively to every student’s project. He is a selfless individual who easily assimilates into any environment and thrives. I foresee a future of leadership for him.”

These days, Benjamins is most interested in the business aspects of the research project. As both he and Grill explain, the goal of the endeavor is not only to develop effective vaccines, but also to create a company in Botswana that can sell them at a reasonable price.

“The MBS gives me a better understanding of what it will take to build a facility there. I’ve learned so much in a short time. Now I approach the lab with a business perspective,” says Benjamins. “I’m really falling in love with the idea of helping companies get their products out, to promote solutions that both address inefficiencies and help save lives. Whether with this lab or this project, I want to make a difference in the world, and I’m in a good place to do that.”