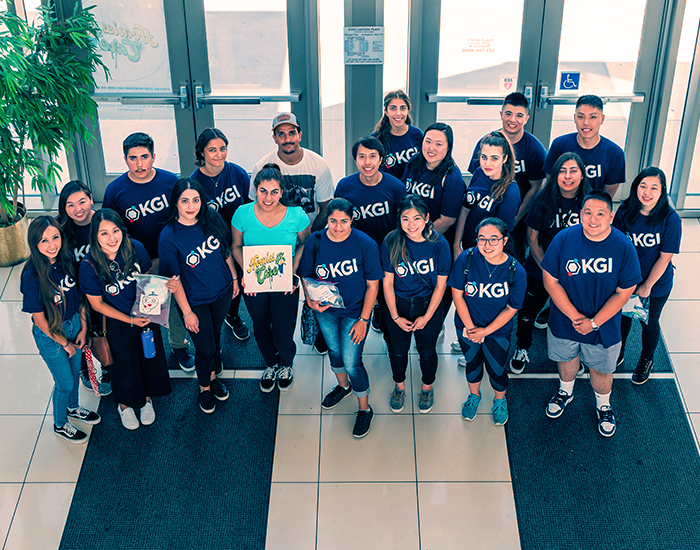 CLAREMONT, Calif. – Life in his native Ethiopia spurred Jemal Hussein, PharmD ’23, to believe that the more he has, the more he should give to others. This led him to cofound the T’ena Foundation—a name meaning “health” in Amharic, the language spoken in Ethiopia—with two friends and organize what they called Homies Care events in Los Angeles.

Now Hussein is bringing Homies Care to Keck Graduate Institute (KGI). He involved approximately 25 KGI classmates in assembling care kits for homeless people as part of the most recent Homies Care event, held on September 14. The students put together kits at Charles R. Drew University of Medicine and Science in Compton, a partner in the event that day and where Hussein earned a Master of Science in biomedical science. Then they distributed the clothing, water, toothbrushes and toothpaste, shampoo and conditioner, soap, and first aid items at area shelters.

“The response was really great. Everyone at KGI loved it and wanted to get involved,” says Hussein, noting that the students also wrote notes with words of affirmation for the homeless people at the shelters. “I’m happy to see a student population that really cares about giving back to the community.”

Catherine Ho, PharmD ’23, was among the students who participated. A veteran volunteer who has taught youths about food preparation and also brought food to people living on Skid Row in Los Angeles, she feels going into the shelters had an even greater impact, both on the homeless people there and her professional development.

“We were able to give out healthy food. Chicken wraps and salad sound so simple, but they don’t get this option very often,” says Ho, who prepared food as well as the care kits.

“As pharmacists, we will have to put ourselves in the shoes of people and connect with them, not just think of them as patients. Doing these events will teach us more compassion.”

Her perspective is consistent with what Hussein says is important to the population Homies Care serves.

“They care about the human connection,” he explains. “Some say they’re often forgotten and seen as not human. We emphasize that these are people first and that it’s important to show empathy.”

Hussein typically holds Homies Care events every two months and is already looking ahead to the next one, which he intends to schedule before Thanksgiving. Meanwhile, he is forming a new club at KGI that will incorporate Homies Care events, which he hopes to extend into Pomona and the Inland Empire. Hussein has enlisted KGI School of Pharmacy and Health Sciences (SPHS) faculty members Julie Truong and Mylene Manalo to serve as advisors to the club he plans to name CARE, an acronym for community, advocacy, resources, and education.

“I want to move it here and include more of the professional students at KGI. I hope we can be a club that connects everyone,” says Hussein. “People sometimes worry about the time commitment. But the barriers we create for ourselves can be broken if you just do it. One person doing a little can accomplish a lot.”