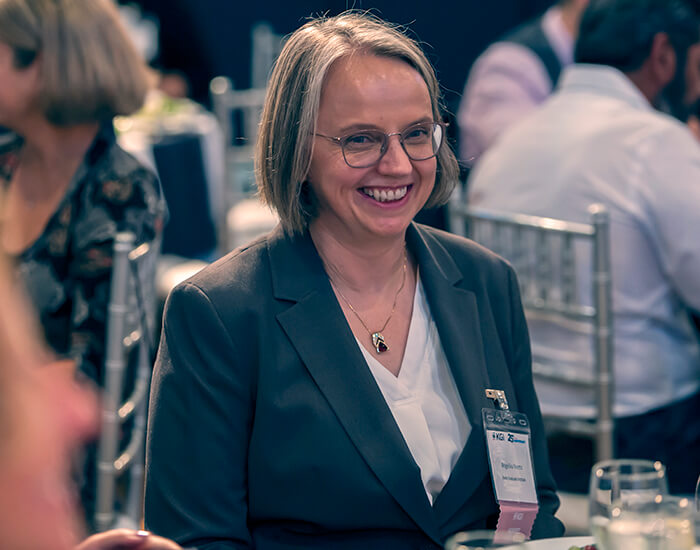 In October 2022, Keck Graduate Institute (KGI) Professor Dr. Angelika Niemz was promoted to Associate Dean of Faculty for the Henry E. Riggs School of Applied Life Sciences (Riggs School). She will supervise all KGI faculty and adjunct faculty of that school while helping implement strategic initiatives.

Additionally, Niemz was named one of KGI’s Most Influential Honorees for the Institute’s 25th anniversary. The 33 honorees comprise former and current KGI faculty, staff, board of trustees, advisory board members, and founding community members who have had a significant impact on KGI’s development over the last 25 years. Nominations were submitted by the KGI community last February.

Niemz has been with KGI for 20 years, teaching the school’s first cohort who graduated in 2002 from KGI’s flagship program—the Master of Business and Science (MBS) program.

“I’ve taught every single cohort that came to KGI, and during that time, I’ve seen the Institute grow and evolve,” Niemz said. “If you think of KGI as a startup company, it’s coming from its infancy through its teenage years, and now we’re heading towards maturity. In that context, my role at KGI has also evolved, where I’ve been able to contribute in several ways through teaching, research, and service.”

She started as an Assistant Professor, eventually becoming an Associate Professor. In 2009, she became the Director of Research.

“I was happy to pursue this opportunity because it enabled me to directly influence how the Institute pursued its mission,” Niemz said. “I like bringing people together and forming a sense of community. When you’re making important decisions, particularly on contentious topics, you need to make sure you involve all the stakeholders. This way, no matter what solution you come up with, you have a better chance of reaching a consensus because people feel like they have a say.”

In March 2021, Niemz was named Chair of the Department of Biological Engineering and Management for the Riggs School.

“That role enabled me to work more closely with the faculty—whom I see as my peers—and address their concerns while facilitating success for everyone,” Niemz said.

During that time, KGI underwent a reorganization to accommodate the school’s growth. Over the years, the student body has grown from 28 in the first graduating cohort to more than 600 today. Additionally, the number of faculty and programs offered has also significantly expanded.

“We had too many faculty for one dean to handle everything, so we decided to put a department structure in place,” Niemz said. “But the challenge with departments is that KGI is very interdisciplinary. It’s harder to draw distinct lines than in a traditional university. We do have subgroups, but we all work together, and we don’t want to form silos.”

Subsequently, KGI eliminated the department structure in the Riggs School. The role of Associate Dean of Faculty was then created, which Niemz has taken on.

“At the same time, I will be looking out for the interests of faculty because changing how we’re teaching impacts the faculty,” Neimz said. “We need to make sure that in the end, it’s a win-win for all parties involved.”

She acknowledges that in light of these changes, it’s important that KGI remains true to its mission.

“We want to honor our values and those qualities that have always differentiated us, but we also need to adjust and adapt to the times,” Neimz said.

In addition to being Associate Dean, Neimz is still carrying on her role as Professor—one she finds deeply rewarding.

“Our students have reached an interesting junction in their lives, where they have an opportunity to reflect and make conscious decisions about where they’re headed, rather than blindly going down an alley,” Niemz said.

She encourages them to get clear on their goals, values, and how they can create the best path moving forward—one that aligns their goals and their values.

“I see teaching as much more than simply showing up in the classroom and giving lectures and exams,” Neimz said. “It’s the interactions outside of the classroom—getting to know the students as people—that motivates me to get out of bed in the morning. And I feel that also makes an impact in the lives of the students.”