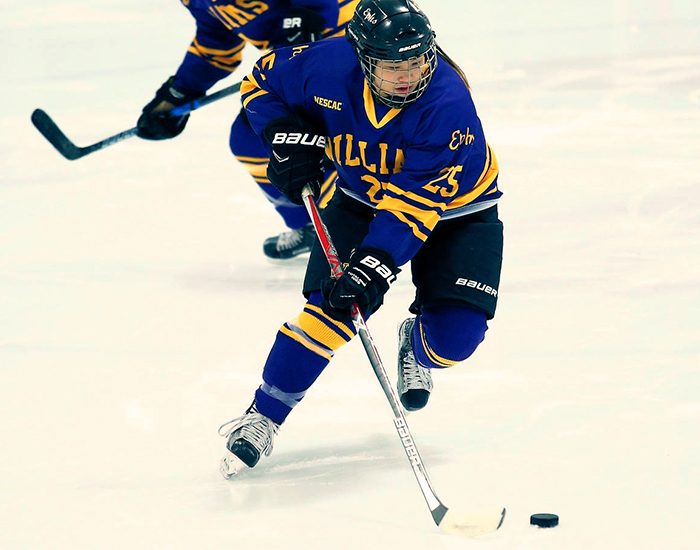 When Keck Graduate Institute (KGI) student Candy Lu, MS ’23, was a young girl, she never anticipated becoming one of the country’s top ice hockey players. After seeing the Disney movie Ice Princess at nine years old, she had her heart set on becoming a figure skater.

Her father approached a professional coach, who immediately dashed Lu’s hopes, stating she was too old. However, the coach did refer Lu to her husband, an ice hockey coach.

Initially, as the only girl on the team, Lu struggled. But after three years, she got her growth spurt and began to hit her stride.

Her father invested in private lessons, and Lu quickly advanced in rank. Others recommended that Lu join a girls’ team.

This turned out to be an opportune time, as Lu was eleven while most of her opponents were thirteen and fourteen. She had just entered the age group where checking—defensive techniques aimed at disrupting an opponent with possession of the puck—was allowed.

“People go crazy at that age because all of a sudden they can start hitting each other,” Lu said. “I was the youngest and smallest on the ice, so I had to learn real quick how to stay on my feet.”

Prevailing as an underdog has been an ongoing theme for Lu—she has a December birthday, which is considered a disadvantage in hockey. Adapting to the challenge of being the only girl helped Lu to develop grit and perseverance. It also sharpened her skills so that when she began playing girls’ hockey, she was already far ahead of her peers.

“I tried out for the regional camp, and it was so easy,” Lu said.

When she was thirteen, she attended National Camp, where she was ranked among the top three in the country in her age group. She caught the attention of many recruiters and went on to play for Pomfret School, a college preparatory school in Connecticut, on scholarship.

Lu saw more victories during this time, including being selected to play for the All Star Team at National Camp, equivalent to the Junior Olympics. However, this time was not without its challenges.

“At Pomfret, I was severely bullied for being Asian American and for being from California, of all things,” Lu said.

Lu was adamant about attending an Ivy League college, but life had other plans for her once again. She ended up getting an athletic scholarship to Williams College, which turned out to be the perfect fit.

“If Williams were a personality, it would be very similar to mine—basically, nerdy and athletic,” Lu said. “I was surrounded by people who are probably going to get Nobel Prizes in the future, which was incredible.”

She majored in Biology and was on the pre-med track but fell behind due to hockey and some personal struggles, including a campus event that led to PTSD.

“Despite being in such an amazing environment, it was also the environment that caused a lot of pain,” Lu said. “Still, I kept coming back to science.”

After graduating, she became a hockey coach and science teacher at another prestigious boarding school on the east coast. Here, she reignited her passion for science and found herself bonding with the young women she taught.

“I saw myself in a lot of these girls who were like, ‘Harvard or nothing,’ and I would show them there’s more to life than that,” Lu said.

Now, Lu has completed her first semester in KGI’s Master of Science in Applied Life Sciences program as she prepares to enter either PA or medical school eventually.

“It’s very eye-opening to have been on the other side as a teacher the past three years and then come back as a student,” Lu said. “I think if anything, I’m much more appreciative of the work that our professors put in.”

She also now understands the importance of developing relationships with her professors—something she had not realized as an undergraduate.

This humanizing factor relates to the medical profession as well.

“I think a lot of people see doctors as not humans,” Lu said. “So it’s important on the other side, as health professionals, to be like, ‘Hey, I’m a human, and I’m here to help you.'”

Some professors that have particularly stood out are Dr. Derick Han, Dr. Alan Rothfeld, and Dr. Larry Grill.

“I love the way that Dr. Rothfeld and Dr. Grill implement class participation, and their lecture style is very inclusive,” Lu said.

“Candy is one of the students that makes a class enjoyable,” Grill said. “I could always see her, as she was near the front of the classroom and engaged. A real bonus was that she was always smiling and seemed to have a happy nature. She was an active participant in the class and asked relevant and thoughtful questions. From the beginning, I knew that she was going to be one of the top students, and she didn’t let me down.”

While Rothfeld’s “Clinical Pharmacology” class has opened her eyes to the world of clinical healthcare through his case studies and personal experiences that he shares with the class, Grill has enlightened her on the industry side of healthcare.

“Even though I’m pre-health, I want to make sure that I’m not closing myself off and once again putting all my eggs in one basket,” Lu said.

Lu’s teaching experience has helped her prepare for exams and develop strong study habits, and she often takes charge during study groups with her peers.

“KGI is the first place where I’ve felt confident in my abilities,” Lu said. “I feel like I’m finally getting to a point where I’m reaping what I sow rather than getting thrown into random situations. I can see a very distinct path ahead of me, and I’m having a lot of fun.”