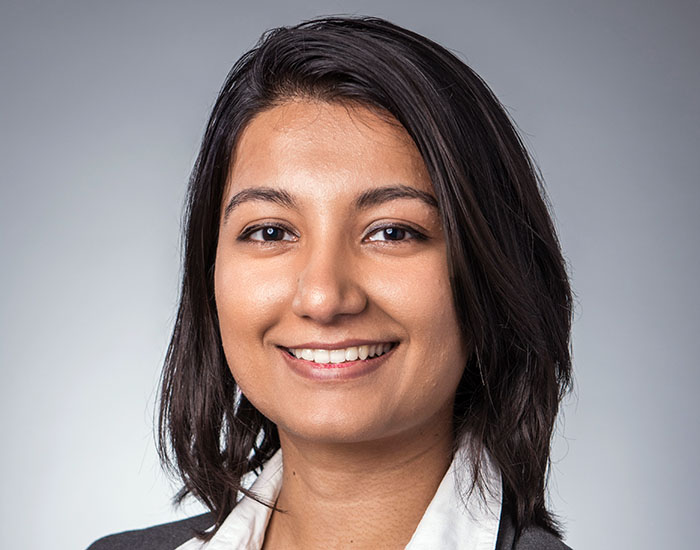 Keck Graduate Institute (KGI) student Harsha Ohri, MBS ’21, was just awarded one of four Women in Bio (WIB) Founders Scholarships for 2020. Candidates were female life sciences professionals and WIB members. With the scholarship, Ohri plans to take a Strategy Execution course from Harvard University and sharpen her strategic skills as a project manager in the life science industry.

Ohri is the Co-Vice Chair of MAPS Peer Groups, Southern California, where she helps other female science professionals to pursue career and networking opportunities. She is driven by her mission to provide accessible healthcare around the world. While pursuing her BS/MS degree at the Indian Institute of Technology, Madras, from 2013 – 2018, she became involved in Engineers Without Borders.

“Being from a country like India, I have always wanted to help people around me and serve patients that suffer from deadly diseases,” Ohri said. “In a lot of villages near my undergraduate campus, we observed a lack of sanitation.”

To address this issue, they raised funds to install a pilot project of 25 bio-toilets. Then, as project coordinator, Ohri led a team of four in developing biosand filters, which have at least six layers of different types of sand and rocks that, when you add water, get rid of the major impurities that cause illness. They educated the people in the village on how to use, clean, and reinstall them.

Ohri continued to hone her project management skills in the summer of 2020 in an internship at Atara Biotherapeutics, a San Francisco company specializing in T-cell immunotherapy.

“I just loved the cross-functional aspects of managing multiple projects because that way I feel like I’m making a larger impact in different functions within the company rather than having to stick to one function,” Ohri said.

After finishing her bachelor’s and her first master’s degree in India, though, Ohri’s trajectory almost took a different path. She was pursuing her Doctor of Philosophy in Neuroscience when a relative told her about KGI.

“I was blown away by the kind of professional courses that were around, and just hearing about those opened my mind as to how much impact I could make in a short while rather than working on a single piece and then hoping that it would get used somewhere down the line,” Ohri said. “So I decided to make that jump.”

One of the highlights of her KGI experience in the Master of Business and Science (MBS) program has been working with Amgen as a Graduate Consultant in Cell Therapy Landscaping. With her team, she’s helping Amgen build and analyze a database of 400 plus clinical trials.

“It’s at an intersection of project management and commercial insights, and that’s something that I want to pursue,” Ohri said. “I love putting flesh to the skin and bones and leading my team with a vision.”

Another highlight has been the opportunity to interact with industry professionals.

“Coming from a research background where you’re busy working in the lab, with minimal interaction with other people, I’ve had to transition into this professional world where you have to develop communication skills and put yourself out there,” Ohri said.

“I’m still learning, but KGI has helped me communicate better with industry professionals in different kinds of settings.”

Ohri’s long-term goal is to work as a project manager for a company that helps people suffering from neurodegenerative disorders. In the meantime, though, she hopes to get as much industry experience as possible in various sectors.

Her mentors include her internship manager as well as a 2006 KGI alumnus.

“He has been pretty pivotal in my career strategy and the kind of progress that I want to make, and he’s connected me to a lot of individuals and his colleagues in this industry,” Ohri said of the KGI alumnus. “There’s no real incentive for these mentors. All they do is help. I’m grateful for these kind souls that want me to succeed.”