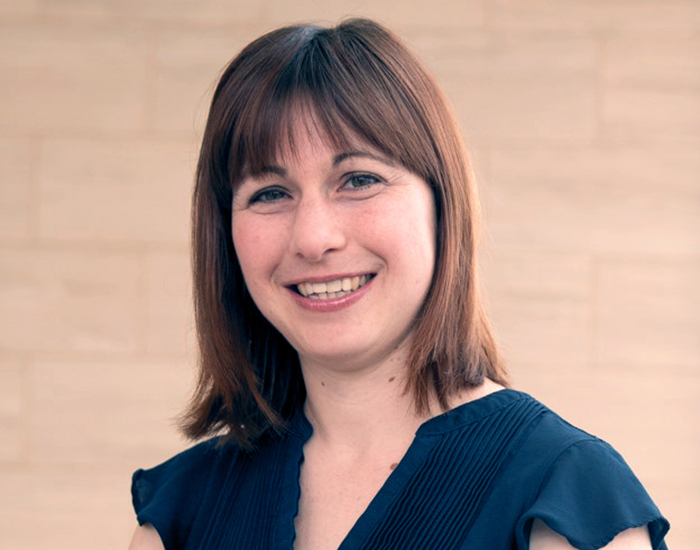 Keck Graduate Institute (KGI) Assistant Professor of Genetics Barbara Bailus recently accepted the position as Chair of the Scientific Advisory Board for the Foundation for Angelman Syndrome Therapeutics (FAST), a volunteer organization dedicated to finding a cure for Angelman syndrome (AS) through research, education, and advocacy. AS is a rare genetic neurological disorder characterized by global developmental delays, learning disabilities, and severe speech impairment.

Bailus started researching AS for her PhD in genetics, focused on genetic engineering. Her research was the first published study showing that you could deliver purified artificial transcription factors to the brain via a peripheral injection, activating the missing gene responsible for AS.

The publication, “Protein Delivery of an Artificial Transcription Factor Restores Widespread Ube3a Expression in an Angelman Syndrome Mouse Brain,” appeared in the 2016 issue of Molecular Therapy. Shortly after her research was published, Bailus joined Dr. Lisa Ellerby’s lab at The Buck Institute for Research on Aging, where she did her postdoctoral work on neurodegenerative disorders. Upon completing her postdoctoral work, she began teaching at KGI and became more involved with FAST as a scientific consultant.

FAST research has been largely driven by the FAST Board of Directors, comprised of parents of children living with Angelman syndrome. FAST was founded by Paula Evans in 2008 with the mission to cure Angelman syndrome.

Bailus works closely with the Board of Directors, their robust independent Scientific Advisory Board, and their Chief Science Officer, Dr. Allyson Berent, who drives the research agenda forward for the foundation. Bailus provides scientific insight and review on numerous potential research avenues.

“My part is not hands-on research at the moment, though this will soon change, so I want to give credit to the people who deserve it, which is the Board of Directors and the Scientific Advisory Board,” Bailus said.

About one in every 15,000 individuals is afflicted with AS. Many other diseases such as Cystic Fibrosis, Parkinson’s, and Crohn’s disease have similar incidence rates but are more well-known than AS.

Those impacted with AS often have difficulty walking and sleeping, waking up every two to three hours at times. They may suffer from seizures and often speak no words verbally throughout their life.

“People with AS typically have a fairly normal life span, which places a burden on the families since their children are not able to live independently as adults,” Bailus said.

Bailus helps FAST evaluate grants from researchers to test potential therapeutics. In the past 10 years, FAST has made significant progress, uncovering many possible therapeutic avenues for AS. One of which, an antisense oligonucleotide, is currently in Phase 1/2 clinical trials.

“Because AS is a monogenetic disorder, we know it is a great target for various gene therapy or a disease-modifying platform,” Bailus said. “The fact that we have gone from having no treatments declared six years ago to having 21 pharmaceutical companies currently working in AS is astounding.”

February 15 was International Angelman Syndrome Day. Bailus believes the key to their success is that instead of waiting for scientists to decide that they want to study AS, the foundation has taken the reigns and partnered with industry, cutting-edge laboratories, and committed experts to develop numerous potential therapies.

“This is probably one of the most exciting gene therapy stories happening right now—how you can take something that literally was not considered treatable to a potential cure in less than 10 years,” Bailus said.