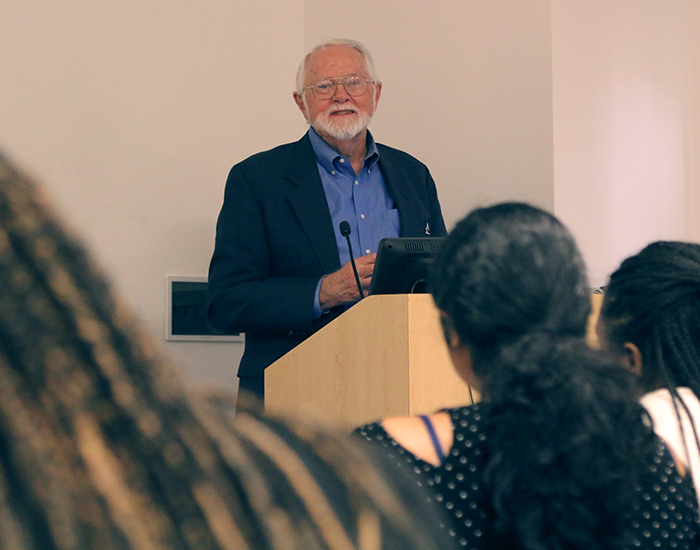 View the photo album from the COH Visit Day

Students in the Keck Graduate Institute (KGI) Summer Undergraduate Research Experience (SURE) program arrived at City of Hope largely unfamiliar with the place they would spend the day. Some were aware that City of Hope (COH) is renowned in comprehensive cancer care. Others knew far less. But that quickly changed.

The nearly 50 undergraduates attending the City of Hope Visiting Day on June 25 learned about the full range of translational research and educational opportunities there, and about the Master of Science in Translational Medicine (MSTM) program that KGI and the Irell and Manella Graduate School of Biological Sciences at COH created together and offered for the first time in fall 2018.

The students from across the country and around the world toured the COH facilities and heard about its translational research and drug discovery program. They also were able to meet leaders at COH, including Dr. Steven Rosen, chief scientific officer, provost of the Beckman Research Institute, and director of the City of Hope Comprehensive Cancer Center; and Arthur Riggs, the pioneering diabetes researcher whose work led to the production of human insulin and who now serves as director emeritus of the Beckman Research Center, director of the Diabetes and Metabolism Research Institute at COH, and a member of the KGI Board of Trustees.

“This was very informative for the SURE students. They were exposed to the research facilities available at City of Hope and spoke with faculty there,” says KGI Professor Anastasia Levitin, who is the co-director of the MSTM program. “They were very excited, and some are now considering the MSTM program.”

Designed to offer students with limited research experience an understanding of how to translate scientific research into commercial products that benefit society, the MSTM program combines coursework at KGI with hands-on research opportunities at COH. Approximately 100 research projects are available to MSTM students.

“It’s very important for students to come to our campus because they don’t know the research component here or the strength of our faculty,” says COH Professor and Associate Dean for Master’s Education Yilun Liu, who also serves as co-director of the MSTM program. “Unlike a typical master’s program, we have more faculty involved in everything from basic research to clinical research and clinical trials—even population genetics. There are so many topics for students to choose from.”

Like Levitin, Liu views the visit as overwhelmingly positive for both the participants and the MSTM program.

“Students were so impressed by the place through our visiting day,” she says. “It totally changed their perception of City of Hope, and they became very interested in the MSTM program.”

This was the second time that the MSTM program hosted a day at COH, and Levitin and Liu hope to repeat it again next year.

“We had a larger group than the first year, and every year will be better and better,” says Levitin.