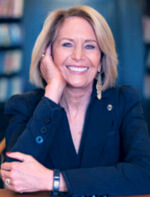 Marcia McNutt, PhD, is a geophysicist and the President of the National Academy of Sciences. From 2013 to 2016, she was editor-in-chief of Science journals. McNutt was director of the U.S. Geological Survey from 2009 to 2013, during which time USGS responded to several major disasters, including the Deepwater Horizon oil spill. For her work to help contain that spill, McNutt was awarded the U.S. Coast Guard’s Meritorious Service Medal.

In 1998, McNutt was awarded the AGU’s Macelwane Medal for research accomplishments by a young scientist, and she received the Maurice Ewing Medal in 2007 for her contributions to deep-sea exploration. She has a BA in physics from Colorado College and a PhD in earth sciences from Scripps Institution of Oceanography.